VIDEO OF RISING TENSION IN ISRAEL
INCLUDING NETANYAHU’S RESIGNATION, HERE

Benjamin Netanyahu stepped down as Israel’s finance minister Sunday in a last-minute protest against next week’s Gaza pullout:

Netanyahu, a hard-liner and former prime minister with ambitions to reclaim the top job, acknowledged Sunday that he will not be able to stop the withdrawal. He said he resigned nonetheless because he fears the pullout will turn Gaza into a “base of Islamic terror” and endanger Israel.

In an immediate response, Israel’s stock market dropped 5 percent within an hour. 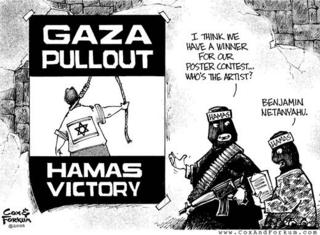 Also, yesterday Hamas announced a strange poster contest as it started its campaign for the hearts and minds of those in Gaza.