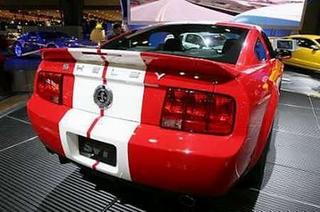 Give Ford Motor Company credit for knowing its customer and reflecting that in one of their latest advertisements. This tasteful advertisement was a great decision by Ford. Not only does it appeal to “Red State America” but it also appeals to “Red Mustang Lovers”!

The Anchoress, in typical brilliance, adds this:

I know some will say “How awful! Ford is exploiting the war to make money!” My feeling: Anti-War tee shirts, anti-war movies, records, videos, books, etc are also exploiting the war to make money from a particular market. Deal with it. I don’t see anyone in the MSM making a fuss over Air America using money meant for poor kids and the elderly, so I don’t want to hear any moralizing.

More Ford News… Did they hire a new PR person or something?

This comes from “The Coalition of the Swilling” about Ford’s latest decision to dump their sleazy spokesperson. Another good move!

Update: (August 5th) Drudge notes that Chrysler is going another route. They are going to air Iacocca and Snoop Dogg spots. Something for everyone, I guess!

It looks like DaimlerChrysler may have bigger issues than Snoop Dogg right now.