Over 640 are believed to have died in the stampede today! 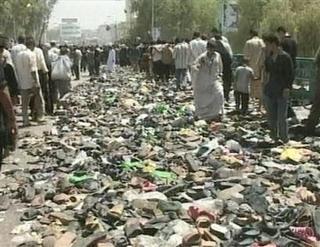 Debris lays scattered in the road after a stampede during a religious ceremony in Iraq earlier today. (AP) Over one million pilgrims had gathered near the Imam Mousa al-Kadim shrine in Baghdad today for the commemoration of the saint’s death.

640 Iraqis were killed when a railing gave way on a bridge over the Tigris River in Baghdad, today.

There was confusion over what caused the railing to collapse on the bridge to the city’s heavily Shiite Kazamiyah district, but police also said there were unconfirmed reports that the stampede may have been caused when someone in the crowd shouted there was a suicide bomber among them.

After the collapse, thousands of people rushed to both banks of the river to search for survivors. Hundreds of men stripped down and waded into the muddy water downstream from the bridge, trying to extract bodies floating in the water.

A medical worker told Associated Press Television News that he rushed in to help those hurt in the attack.

“We saw the dead scattered on the ground and the injured were taken to al-Kadimiyah hospital for treatment. There are more injured children than the men and women,” the medical worker said.

Television reports said about one million pilgrims from Baghdad and outlying provinces had gathered near the Imam Mousa al-Kadim shrine in the capital’s Kazimiyah district for the annual commemoration of the Shiite saint’s death. 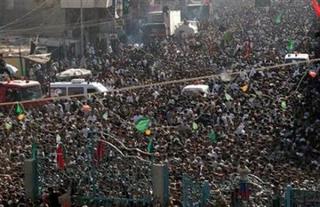 Ambulances remain on standby among the crowd of Iraqi pilgrims near the Kadhimiya mosque in Baghdad on August 31, 2005. (Reuters)

The pilgrims were trampled or pushed to their deaths into the Tigris River:

Scores jumped or were pushed to their deaths into the Tigris River, while others were crushed in the crowd.

The deaths appeared to be the single biggest loss of life in Iraq since the U.S.-led invasion in March 2003. Prime Minister Ibrahim al-Jaafari, a Shiite, declared a three-day mourning period

One survivor said panic ensued when a rumor spread that a suicide bomber was in the crowd. Tension already had been running high because of a mortar attack two hours earlier against the shrine where the marchers were heading. The shrine was about a mile from the bridge. 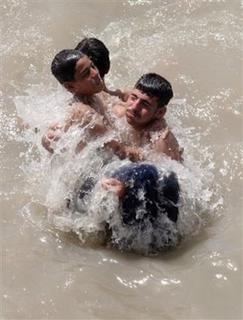 A boy is rescued from the Tigris river, in Baghdad, Iraq, Wednesday, Aug. 31, 2005. A railing collapsed Wednesday on a bridge packed with Shiite worshippers marching in a religious procession, sending crowds tumbling into the Tigris River. (AP)

Television reports say about a million pilgrims from Baghdad and outlying provinces had gathered near the Imam Mousa al-Kadim shrine for the annual commemoration of the Shiite saint’s death. 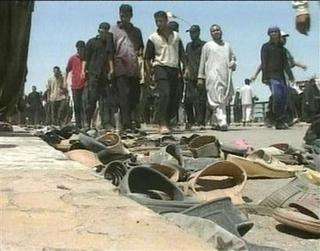 Lost shoes lay in the road in this image made from television, after a railing collapsed Wednesday, Aug. 31, 2005, on a bridge in Baghdad, Iraq, packed with Shiite worshippers during a religious procession, sending crowds tumbling into the Tigris River. (AP)

Update: I agree with Athena, “The threat of a bomb killed more than a bomb itself would.”

This reminds me of the Chicago Bar Stampede when the panicked patrons piled on each other to get out the door. A frightened mob is very dangerous.

Update 2: (Thursday AM) Guess who takes responsibility for the tragedy? Guess who gets the blame?