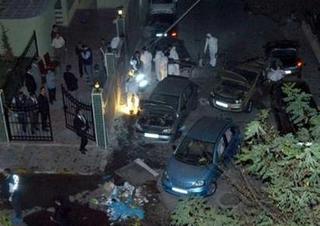 Two people were murdered as they were getting into their car after leaving a wedding party around midnight this morning. One source says the blast came from a trash bin nearby.

The man and woman, Eda and Hatica Muslu, were getting in their car when the explosion occurred, according to the DAWN news network.

Police, firefighters and ambulance workers are at the scene, sifting through the wreckage of destroyed cars and helping the injured.

Police said the first blast went off in a trash bin, wounding two municipal workers and a passer-by. About five minutes later, another blast wounded two tourists and a resident of Antalya.

It is still not clear what caused the bombing. The BBC says it was a mother and her daughter and that it was a gas tank explosion. This is quite different from what CNN reported. 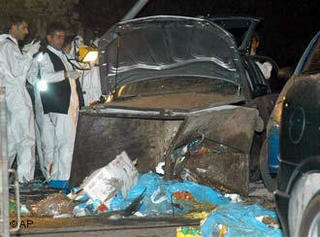 Turkey has been hit by a number of bomb blasts this past month:

A series of explosions, one of them a deadly bomb attack, have hit Turkey over the past month.

Most recently, nine people were injured Tuesday when two small blasts of unknown cause ripped through garbage cans in the popular Mediterranean resort of Antalya.

The incident followed the bombing of a bus in the seaside resort of Kusadasi on July 16, which killed five people, among them a British woman and an Irish teenager.

The police blamed the attack on the Kurdistan Workers’ Party (PKK), an armed rebel group branded terrorist by the United States and the European Union, which has recently stepped up anti-government violence.