This was coming…. HERE.

My favorite part (not that Cindy Sheehan is extremely liberal, or anything):

Sheehan has called President Bush “that filth-spewer and warmonger.” She says “America has been killing people on this continent since it was started” and “the killing has gone on unabated for over 200 years.” She calls the U.S. government a “morally repugnant system” and says, “This country is not worth dying for.”

I have a feeling every time this gal opens her trap, Michael Moore gets a residuals check. 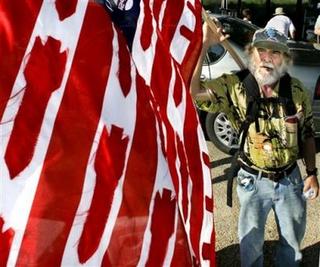 Cindy is not a leftist and these are just ordinary Americans helping her heal from her grief.

And, now this from Drudge:

“We are not waging a war on terror in this country. We’re waging a war of terror. The biggest terrorist in the world is George W. Bush!”

So declared Cindy Sheehan earlier this year during a rally at San Francisco State University.

Sheehan, who is demanding a second meeting with Bush, stated: “We are waging a nuclear war in Iraq right now. That country is contaminated. It will be contaminated for practically eternity now.”

California Conservative has more on the protesters with some interesting pictures, HERE.

Here’s another nut. Peter Beinhart, from the Washington Post wants to make you believe that this protesting mother is anything more than what she is… a democratic media swarming Anti-Bush, Anti-War prop.