Can Gaza officials stop the violence after the Israelis leave or will it contine to escalate? 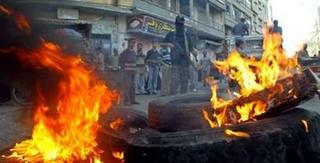 Gunmen in Gaza stormed a Red Crescent building and took away a top official yesterday.

The gunmen from al-Aqsa Martyrs Brigades, part of Palestinian Authority Chairman Mahmoud Abbas’ Fatah, took over the building used as a hotel in the southern town of Khan Yunis and also told shopkeepers to close their stores. They said they were protesting after senior official Suleiman al-Fara was taken away by men they believed to have come from the Preventive Security Service, a powerful internal security agency.

“We will continue to carry out our protest activities and we are prepared to carry out things beyond imagination,” said one of the gunmen. 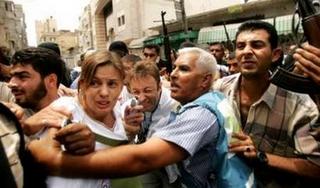 While earlier today, United Nations workers Christine Blunt of Britain (2nd L) and Steven Karl of Switzerland (3rd L) are escorted by security officers after being freed from kidnappers in the Gaza Strip August 8, 2005. The two aid workers were kidnapped and released moments later. (Reuters)