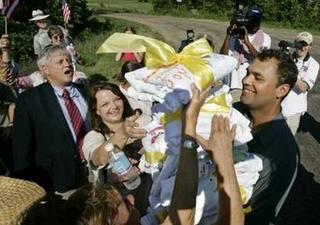 Unlike the 3,340,000 news pages that Cindy Sheehan and the Anti-War crowd has amassed,… there was another protest in Crawford, Texas today that you will not hear much about:

Bush supporters from Oklahoma and Georgia delivered 35 bed sheets filled with message of support for the President and U.S. troops Friday.

The group, most of whose members were from Columbus, Ga., carried the sheets to the checkpoint outside the President’s Central Texas ranch to hand them over to a White House representative.

Local volunteers hosted a breakfast for the group Friday morning.

“Help us tell the media that we are strong in numbers, that we don’t want war, but we must finish the job,” the group said in a prepared release.”

The rally comes a day after the sudden departure of Cindy Sheehan of Vacaville, Calif. who had vowed to continue her two-week-long vigil until the President agreed to meet with her about the death of her son in Iraq or until Mr. Bush returned to Washington.