The children take the stand at the Beslan Terrorist Trial. 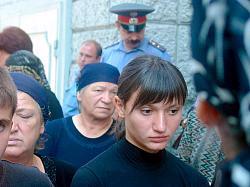 Irina Dzagoyeva testified that her sister was forced to wash blood off a floor. (Moscow Times)

Children of the Beslan Massacre from a year ago sobbed in court as they recounted the horrific abuse they endured last year when terrorists took siege of their school in this North Ossetian town:

A 10-year-old boy testified Thursday, August 25th in the trial of the one lone terrorist to be captured alive after the siege in Beslan. One of the female terrorists … told us that if she found a phone on anyone, that person would be killed and three more people near him or her would be killed too.

As a 14 year old boy tried to stop sobbing on the stand, the courtroom spectators, mostly women wearing black clothes and black headscarves, swore at the defendant, Nurpasha Kulayev, and shouted, Give this terrorist to us! We will tear the bastard apart!

A 17-year-old girl testified that the hostage takers gave a bucket of water to one boy and told him to give it only to the children. They said that if any adult drank the water, they would shoot the boy. 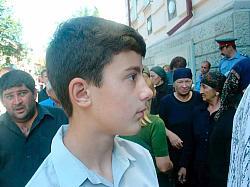 Tamerlan Toguzov a survivor of the Beslan terrorist attack, stands outside the court Wednesday to talk with reporters. He shared a bottle of vodka with other thirsty hostages to survive the ordeal. (Moscow Times)

Alan Kochiyev, 13, told how the attackers shot a hostage in the gym. He also recalled how they forced a boy sitting next to him to stand up and threatened to shoot him if the hostages did not keep quiet.

Tamerlan Toguzov, 13, said that after a female suicide bomber died in a blast on the first day, he and his mother, a doctor, removed medicine from her bloodied bags. He said his mother, Larisa Mamitova, treated hostages and wounded attackers and twice was sent out to hand over notes demanding that federal troops be withdrawn from Chechnya and that President Vladimir Putin resign.

The boy said he found a bottle of vodka in one of the bomber’s bags and sipped it with other children because they had nothing else to drink.

Another child said he had seen the lone terrorist on trial in the gymnasium during the siege:

Alan Tzgoyev, 12, told the court he had seen defendant Nur-Pashi Kulayev in the gym where assailants held hundreds of children and adults hostage at School No 1 in the North Ossetia town of Beslan.

At least 330 people died in the attack last September. Kulayev has pleaded not guilty to charges including terrorism and murder. 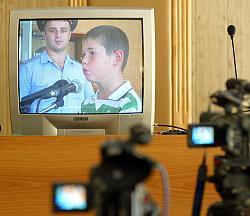 But, the most moving testimony was that of the 14 year old boy who burst into tears:

Malik Kalchakeyev, 14, speaking slowly and in great detail, told of how the schoolchildren and their parents were herded into the school’s gym, how the attackers stopped providing water and how they taunted the exhausted hostages, often forcing them to stand and sit quickly in the hot, crowded gym.

“On the second day, we were all very thirsty. Women told us, the boys, to pee into plastic bottles so that the children could then drink our pee,” the boy said, bursting into tears. “I peed into a bottle, and small children — even babies — drank it.”

“Listen, Kulayev, listen,” Judge Tamerlan Aguzarov angrily ordered the defendant, who showed no emotion as he sat in a steel cage with bulletproof glass behind the testifying children.

As the boy tried to stop sobbing, the courtroom spectators, mostly women wearing black clothes and black headscarves, swore at Kulayev. “Give this terrorist to us! We will tear the bastard apart!” the women shouted.

Update: Hat Tip to Charles Johnson and the LGFer’s for never forgetting.