Bangladeshi authorities continue to make arrests following the 400+ bombings throughout Bangladesh on Wednesday.

A Bangladesh madrassa student found with a video of speeches by Osama bin Laden and military training tactics was among 100 people held after a nationwide wave of bombings linked to Muslim extremists, police said.

A number of those arrested were students or teachers from madrassas, or Islamic seminaries, a senior security official told AFP on condition of anonymity. 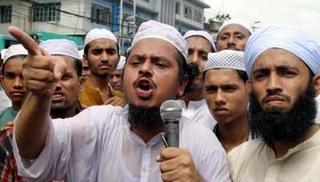 A Bangladeshi Muslim leader addresses the crowds during a protest against the recent bomb blasts, after the Friday prayer in Dhaka August 19, 2005. (Reuters)

“From the other two we found books containing training manuals,” he said, adding all three had been transferred to the capital for further questioning. 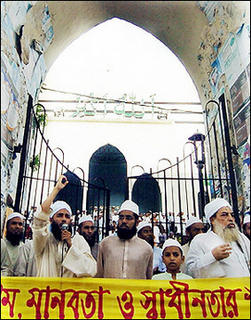 The leader of a Bangladeshi Islamic group delivers a speech during an anti-terrorist demonstration outside the Baitul Mukarram mosque in Dhaka. (AFP)

“These people are the lowest rung of the militant organisation that carried out these attacks,” the security official said.

“We are questioning them to try to find out the extent of their operation and who their chiefs are,” he added.

Two men, meanwhile, died when a bomb they were making exploded in a remote western region of the country, but police said they were believed to be criminals and not linked to the series of blasts.

Bangladesh officials were disturbed over the apparent organizational structure of the terrorists:

The devices were detonated in almost all the country’s main towns and cities within one hour of each other, triggering widespread panic.

“There is no doubt now that these people have a network, a very good organisational structure and that they have displayed a very high level of coordination,” said security expert and former army major general Muhammad Ibrahim.

“And it appears that they intentionally kept the violence at a low level but that they are capable of causing greater damage,” he added.