Protesters shouted “We sacrifice our souls and blood for you, Saddam” as they demonstrated in Iraq today.

Is that George Galloway behind the wheel? 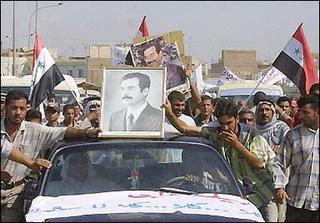 Fearing for their livelihoods, hundreds of Saddam supporters hit the streets to protest the new Iraqi Constitution today:

Protests were held in the restive town of Baquba, just north of the capital, as well as the ethnically divided northern oil centre of Kirkuk.

Some 500 demonstrators from the disenchanted Sunni Arab former elite, which dominated Saddam’s regime and all previous Iraqi governments, took to the street in Baquba, carrying posters of the former dictator, along with banners saluting him and his Baath party.

“The Baath remains steadfast…Your constitution has no support,” said one banner.

“We sacrifice our souls and blood for you, Saddam,” said another, taking up a refrain common under the personality cult of the old regime.

Iraqi security forces cordoned off the area around the provincial governor’s office and fired warning shots to disperse demonstrators. 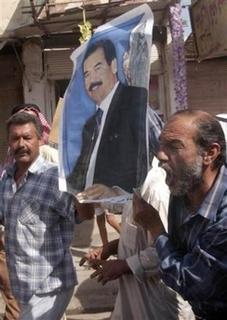 Protesters carry a poster of the former Iraqi leader Saddam Hussein as they rally against the new constitution, in Baqouba, 60 kilometers (35 miles) northeast of Baghdad, Friday, Aug. 26, 2005. (AP)

Protesters chanted “Baathists are faithful Arabs” as they rallied in the streets of Kirkuk:

In Kirkuk, hundreds of Sunni Arabs demonstrated, calling for the omission of the article branding the Baath party as a terrorist group and opposing a federal constitution for Iraq.

“Baathists are faithful Iraqis… No to federalism,” said one of the banners brandished by the demonstrators in the mixed Arab, Kurdish and Turkmen city that the Kurds want incorporated as the new capital of their autonomous region.

“We will fight against those who attempt to erase our Arab identity,” said another. 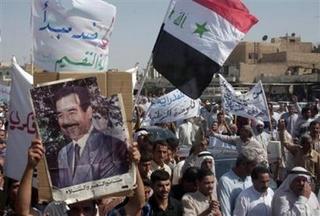 Protesters wave Iraqi flags and carry banners and a poster of the former Iraqi leader Saddam Hussein as they rally against the new constitution, in Baqouba, 60 kilometers (35 miles) northeast of Baghdad, Friday, Aug. 26, 2005. In the predominantly Sunni city of Baqouba, about 5,000 people rallied to protest against the proposed charter. Demonstrators carried photos of Saddam Hussein _ the first time they have been seen in public since the former dictator was arrested in December 2003. (AP)

Jim Hoft
Jim Hoft is the founder of The Gateway Pundit, one of the top conservative news outlets in America. Jim was awarded the Reed Irvine Accuracy in Media Award in 2013 and is the proud recipient of the Breitbart Award for Excellence in Online Journalism from the Americans for Prosperity Foundation in May 2016.
SICK. Biden Campaign Releases Gross Ad Blaming Trump for Death of 90-Year-Old Woman Who Caught COVID-19 in Nursing Home
Young Goon Who Beat the Hell Out of Macy's Store Manager in Gruesome Planned Attack Walks Free with Only Probation
It Begins: Black Lives Matter Mob Demands White People Move Out of Homes and Leave Them for Black People (VIDEO)
AG Barr: There Will Be an Announcement of a "Development in Durham Case" on Friday (VIDEO)
Breaking News: AG Bill Barr Goes on Hannity to Announce Launch of Operation Legend to Help Crack Down on Violent Crime in US Cities (VIDEO)
See more...