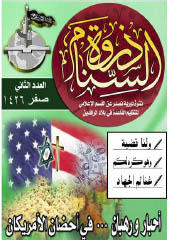 As if blowing up innocent Iraqis, sawing heads off of infidels, and running from US and Allied military forces were not enough to keep one busy…

Abu Musab al-Zarqawi has released the third edition of the Camel’s Hump!

Al-Qaeda in Iraq recently issued the third issue of their publication Thurwat al-Sinam, also known as both The Highest Point and The Camel’s Hump.

This issue is the first edition of the publication to explicitly reference military strategy, delineating five sectors or “fields” of jihad: military, security and intelligence, medical, information, and economic.

Throughout the issue, the authors reiterate that if the mujahideen focus only on military operations, regardless of their successes in battle, they will lose the jihad on other fronts. They provide examples such as Afghanistan and Bosnia wherein an alleged military victory by the mujahideen was overturned in the eyes of the international community because the mujahideen neglected other sectors of warfare.

Of particular interest as a non-military based threat to the mujahideen is the creation of a “peaceful Islam” which has “nothing to do with the original religion” and is spread by “information media all over the earth” in the hopes that “the infidels will succeed in this which they could not do militarily”.

The issue pinpoints boycotts as a very effective weapon in the arsenal of the Muslim people, saying that even the “American people boycotted French cheeses” to support their government against French policies.

The economic section specifically references Phillip Morris’ high profits in the Muslim world, claiming that the profits reach “26 million dollars annually”. The authors suggesting that if only one company can make such high profits in the Muslim world, a general boycott on all companies and governments affiliated with America would serve as a harsh punishment for embarking on a war against Islam.

The second issue of the Camel’s Hump from June reiterated their position on the imperative for jihad and its utility, and included many articles to this effect, as well as pieces by the Shari’a Committee of al-Qaeda in Iraq and a will of a suicide bomber.