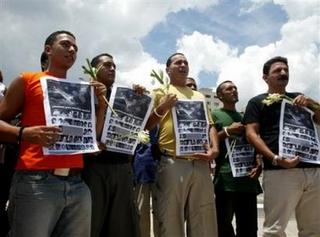 Hurricane Dennis may have left more than tremendous destruction on the island of Cuba. A. M. Mora y Leon of Publius Pundit and Babalu’ Blog have noticed spontaneous demonstrations springing up in its wake…

Fidel Castro is facing revolts after Cuba was hit by its worst hurricane in memory. The destruction will cost $3 billion. But Castro is doing everything he can to keep aid out. And that’s an outrage.

Following Hurricane Dennis, a different wind is blowing through Cuba — the wind of change. Three spontaneous and rare demonstrations sprang up in Havana this week. Fed-up Cubans attacked an electrical substation after learning of yet another delay in restoring power. Other angry Cubans protested housing evictions.

The despair from hurricane damage on a neglected and oppressed people is leading to protests about Castro’s rule. The third protest commemorated Castro’s military assault on a boat of 41 fleeing refugees 11 years ago (pictured above).

Cubans are in a dark mood. In the hurricane rubble, Castro’s failed regime offers them nothing. The damage inflicted by the hurricane is worse than anyone realized. The category 4 storm howled across nearly the length of the island at 135 mph for 12 hours, knocking out electricity and power. Some areas are yet to be heard from.

At Least 11 of the demonstrators opposing the Castro Regime from the “tugboat” protest were arrested at their demonstration.

The conditions were becoming unbearable in the communist state even before the hurricane:

The Record summer heat has combined with hurricanes, relentless power cuts, water shortages and crumbling housing to tax Cubans’ traditional patience with President Fidel Castro’s government and the strains caused by the US embargo.

Mr Castro also increased most state salaries and pensions, announced plans to improve free healthcare – strained by the absence of thousands of doctors sent to Venezuela – and promised to shore up waterworks and transport and build 50,000 homes a year.

But since May, daily blackouts of six, 12 and even 18 hours have left Cubans miserable and expectations dashed, even as millions live with little if any running water due to a prolonged drought and then suffer leaky roofs when it does rain. 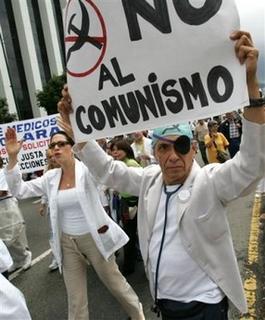 And, Venezuelans are not happy with Cuban doctors taking their jobs.

No Doctors for Oil!

Doctors in Venuzuela are protesting the Cuban doctors in their country saying they are a political tool of the Castro and Chavez Alliance.

* I hope they are providing better care than what you would get from Cuban Health(?) Care! *

But, some Americans do not like the added pressure on the Castro Regime from the US embargo. Some women “activists” from Seattle are planning a trip to Cuba in defiance to American law to protest the stricy rules of travel to the island:

Cindy Domingo (more on Cindy Domingo HERE)has been to Cuba a dozen times, but hopes she isn’t pushing her luck too far for her 13th trip, when she’ll travel without U.S government permission to protest tight new restrictions on visiting the communist country. Domingo, a longtime Seattle activist dedicated to humanitarian and feminist causes, will accompany three other Seattle-area women on the July 21 trip and expects to join hundreds of other defiant travelers in a “travel challenge.”