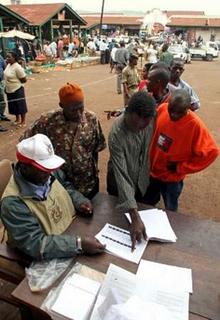 Ugandans line up to vote in the capital of Kampala today.

After blaming political parties for the past suffering in Uganda and outlawing them 19 years ago, the government is holding an election today to move back to a multi-party system:

President Museveni decided the country would be ruled under the “movement” or “no party” system of government. Since then, political parties have only been allowed to maintain a minimum presence through national offices.

The president blames multiparty politics for the decades of oppression Ugandans suffered under the East African country’s past rulers, whom he has accused of dividing the population along ethnic and religious lines.

However, Wafula Oguttu, spokesman for the newly formed opposition political party, Forum for Democratic Change, argues that it was individuals, not parties, which had caused wars in Uganda.

“We have had wars in various regions of the country under Museveni’s rule that was devoid of party politics, therefore it is wrong to suggest that parties caused trouble in Uganda,” Oguttu said.

Oguttu said the country still suffered bad governance. “Key sectors of the economy are headed by people from the president’s home area.

“We have got the most sectarian regime in the history of the country in spite the fact that there are no parties,” he added. 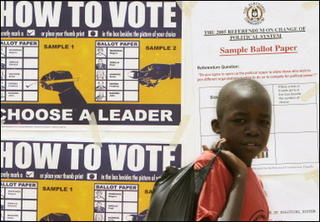 A poster in Uganda shows voters the proper way to mark their ballot in today’s elections. (AFP)

International donors and activists push Ugandans to accept multi-party politics as they head to the polls today:

Ugandans are choosing whether to allow multiparty politics in the East African country in a referendum Thursday, the first step in reforming the country’s constitution, which forbids political parties from campaigning in elections.

President Yoweri Museveni banned multiparty politics when he came to power in 1986, insisting political parties were tribally based and responsible for years of partisan violence and civil war.

Under pressure from international donors and Ugandan activists, Museveni agreed to reintroduce multiparty politics, if a majority of voters approved.

Opposition groups have boycotted the US$12 million referendum, insisting it was a waste of money and the reforms should be instituted without a vote.

“I appeal to voters to turn up in large numbers and exercise their democratic rights by choosing a system of their own choice,” he said.