Laura Bush brought a message of hope to the women in Africa this week. 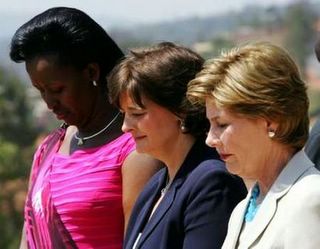 Laura Bush, Jenna Bush, and Cherie Blair paid tribute to those who lost their lives in Rwanda in 1994, yesterday:

Blair said it was especially poignant for her to be remembering the British dead at a site that marks those lost in Rwanda.

“I am very moved by what I have seen, also distressed that the world looked on while it happened,” Blair said.

After touring the museum exhibit, the women, all somber, signed a visitors’ book. 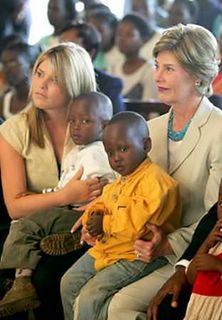 Laura Bush says she is looking to Rwandan President Paul Kagame to suggest how the U.S. can make sure that a genocide his country experienced more than a decade ago is not repeated in the Sudan’s Darfur region or anywhere else. 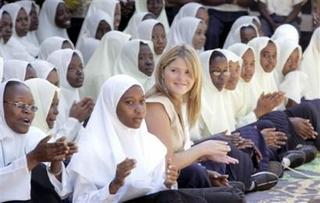 Laura Bush handed out “George Bush” crayons Zanzibar, Tanzinia as she visited one of the several schools the US has set up in the area:

The first lady visited a school today on Zanzibar, admiring the mud pies made by the wide-eyed, red-uniformed preschoolers playing in the schoolyard. The school is one of 16 on the island set up with U-S seed money. 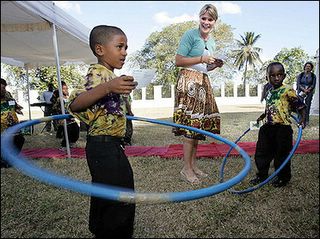 Laura Bush set out on the trip to Africa on Tuesday to bring hope to the suffering continent and to highlight the battle against AIDS and contributions by her husband’s administration:

Laura Bush, clearly moved by a jubilant song from a roomful of HIV-positive South African mothers, thanked them on Tuesday for “stripping away the stigma” of the disease and helping prevent more babies from being born with AIDS.

Mrs. Bush’s three-nation African trip is aimed at highlighting the battle of her husband President George W. Bush and his administration against AIDS on the world’s poorest continent. Tuesday, Mrs. Bush visited a health complex set amid thousands of tin shacks with tar paper roofs held down by tires in the Khayelitsha area outside Cape Town.

About 400 women deliver babies at the facility each month. Though 28 percent of them have the virus that causes AIDS, treatment at the facility has reduced the transmission of the disease to their newborns to less than 5 percent, said Dr. Keith Cloete, health director for the Western Cape province.

Update: I just noticed the caption from this Reuter’s picture…

Africa has heard rich nations promise to help the continent out of poverty before, but has ended up with little more than crumbs. After the euphoria of last week’s meeting of the Group of Eight wealthy nations that pledged billions of dollars in new aid and debt relief, a continent sobered by the G8’s poor record of delivery is wondering whether it really won anything.

That’s pretty morose! How much do you want to bet that Africa is elated and that Mike Hutchings from Reuters is the one who is down!

If anyone has data on the G8’s contributions to Africa please post it below. I would like to see what has Mike so depressed!

Update 3: (7:00 PM) Reader KC generously took some time to find some information about an estimated $500 Billion in Aid over 50 years to Africa.

The G8 promised $50 billion in aid to Africa at the Scotland Summit.

Millineum Challenge provides assistance to countries who are making strides in democracy.

Also, HERE is a post with a video of President Bush welcoming several African leaders from countries where successful democratic elections were held this past year.

And, earlier this year, Madagascar was the first recipient of a US aid initiative that rewards developing countries for their commitment to political and economic reforms.