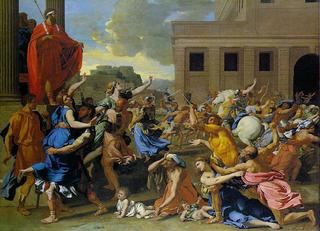 The “Avoidance and Accommodation” segment of our society is looking more and more like the men of Sabine. They are failing to take in the historical evidence disproving the desired actions and outcome of their behavior. And, they are setting a table for the West like that famous dinner party in Sabine.

There was more evidence of this today. The BBC released a fraudulent and biased report by the glaringly Leftist Oxford Research Group claiming 25,000 “civilians” have died in the Iraq War and 37% of those innocent civilians were killed by US troops!

This was just so ridiculously over the top! If it were true you could be sure we would have heard about it day and night before some study released the information today. It will be interesting to fact check their totals. The Oxford Research Group is not as generous with its sources as a responsible blog would be.

So here is my first gentle lesson in re-educating the Left. (I thought I’d use some art history to capture their attention! The Left loves art history!) This story goes back quite a ways. Yet, this truth learned by the Romans is the same truth that needs to be re-learned today, especially by the dangerous liberals who wish to poo-poo the safety and defense of this country.

The Rape of the Sabine Women is a mythological event from just after the founding of Rome. The young city of Rome had granted citizenship to criminals and lawless persons to grow quickly, and was therefore winning the wars against its neighbor’s, but a lack of women made it clear that the greatness of the city would vane in a generation or two due to lack of male offspring.

The neighboring town scorned at Roman requests to marry their women, but accepted an invitation to a huge religious celebration in honor of Neptune. In the middle of the party, the Romans rushed in and abducted the Sabine women, who were the forced to marry their rapists.

Caleb Carr has more on Victim Societies today at Instapundit:

What common elements can we establish among these societies at the given moments that they were victimized?

Of paramount interest is the fact that each nation had recently exhibited a weakening public determination to aggressively meet the rising challenge of Islamist terrorism. Consider the U.S. of 2001: The Clinton administration had left behind a record of essentially ignoring those few terrorism analysts who asserted that full-fledged military action against al Qaeda’s Afghan training bases, backed by the possibility of military strikes against other terrorist sponsor states, was the only truly effective method of preventing an eventual attack within U.S. borders. President Clinton himself, we now know, at times favored such decisive moves; but opposition from various members of his cabinet, the Joint Chiefs of Staff, and finally (as well as most importantly) a general public that would not or could not confront the true extent of the Islamist problem generally, and al Qaeda specifically, forced him to confine his responses to occasional and counterproductive bombings — even as the death toll from al Qaeda attacks on U.S. interests abroad rose dramatically. Correctly sensing that the new president, George W. Bush, was treating the terrorist threat with a similar attitude of denial, al Qaeda’s Hamburg-based subsidiaries launched the 9/11 operation. . . .

In all of these examples, then, the “trigger” for terrorist action was not any newly adopted Western posture of force and defiance. Rather, it was a deepening of the targeted public’s wish to deal with terrorism through avoidance and accommodation, a mass descent into the psychological belief, so often disproved by history, that if we only leave vicious attackers alone, they will leave us alone. It is hardly surprising that by actively trying — or merely indicating that they wished — to bury their collective heads in the sand, the societies were led not to peace but to more violent attacks.

It will be interesting to see how the West holds up to the War on Terror. The pendulum could swing either way. Will we end up victorious? Or, will we end up like the men and women of Sabine?

Update: (Wednesday PM) London Mayor Ken Livingstone who became a hero with his remarks immediately after the London bombings is reverting back into his “men of Sabine” modus operandi that is more true to form.