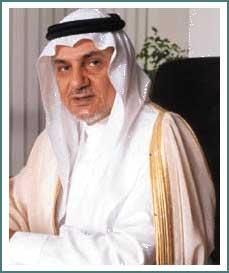 Prince Turki was head of Saudi Intelligence and served in intelligence for more than 25 years. He was the leading liason between the Saudis and the CIA:

The prince was regarded as having close ties to Bin Laden. For years, Turki pledged to lure Bin Laden out of his Afghan hideout and into a trap set by the United States.

When that promise failed to materialize, a crisis developed between Riyad and Washington, the analysts said. Last week, the king fired Turki, who served in his post for more than 25 years and was the leading liasion to the U.S. CIA.

“It was realized that the negotiations between Turki and Bin Laden were not working and that the United States and Saudi Arabia were being taken for a ride,” Guillaume Dasquier, editor of a leading European intelligence newsletter, said.

His next responsibility was the Ambassador to the United Kingdom:

Prince Turki, the Saudi Arabian ambassador to the United Kingdom…

…is charged in a civil suit by the families of the 9-11 victims with providing material support to the terrorist networks.

Author Gerald Posner makes a case against Prince Turki in his book “Why America Slept – The Failure to Prevent 9-11.”

Posner alleges that Prince Turki acted as an intermediary between al-Qaida and Saudis when he organized meetings and provided al-Qaida with material and financial support in return for a promise to divert terrorist activities from Saudi Arabia.

In an Arab News publication, Turki responded to a review of the book he read in Time magazine.

Ali Al-Ahmed, the executive director of the Virginia-based Saudi Institute, asserts a relationship existed between Prince Turki and Bin Laden in the 1980s and 1990s.

“(Prince Turki) was personally involved with supporting groups that committed acts of terror,” Al-Ahmed said. “Some of the people he supported attacked the U.S. and killed Americans.”

His sister financed at least two of the 9-11 terrorists:

Prince Turki went public on CNN in defense of his sister Princess Haifa al-Faisal, whose charitable donations ended up financing two Saudi 9-11 hijackers, according to the joint U.S. House-Senate Intelligence Committee in November 2002.

* Turki has denied the allegations in the complaint, he says if he did assist Bin Laden to spare attacks on Saudi Arabia, his action would not have been improper and shouldn’t be the basis of a suit against him. *

There is more mention of Saudi scientists were present when Pakistan performed nuclear tests since the Saudi’s were the financiers:

Reliable sources in Pakistan have reported that when Pakistan carried out its nuclear tests at Chagai in May,1998, nuclear scientists from Saudi Arabia and North Korea were present and that one of the devices tested was of North Korean origin.

Paksitan has denied they sold nuclear weapons to Saudi Arabia earlier this year.

Pakistan on Monday rejected a report that an international black market in weapons technology, run by disgraced Pakistani scientist A.Q. Khan, may have sold equipment to Saudi Arabia and other Arab countries.

Pakistan said the new allegations that they sold technology to Saudi Arabia were baseless back in February:

Information Minister Sheikh Rashid Ahmed described as “baseless” the allegations printed in this week’s edition of Time magazine, but he did not rule out that Khan could have sold technology to more countries than initially thought.

“We don’t know of any other country that he gave nuclear technology to. But if there is another country, we will investigate,” Ahmed told The Associated Press. “If there are any questions (for Khan), we will ask them.”

That is why the suspicious activity reported in June rises eyebrows.

This report was written by a retired Additional Secretary, Cabinet Secretariat, Government of India, New Delhi on March 24, 2004 who concluded:

It is reliably learnt from well-placed observers that it also came out during the recent interrogation of the associates of Khan in Pakistan’s nuclear establishment that after Osama bin Laden shifted from Khartoum to Afghanistan in 1996, Dr.Khan was also looking after bin Laden’s extensive investments in the mining industry in many African countries and that the money invested in the Timbuktu hotel had come from these investments of bin Laden.

The Pakistani authorities have reportedly suppressed this information and not shared it with the US.

The “Jawa Report” saw the seriousness of these connections when in April of this year they reported:

Holy freaking schneike! No, this doesn’t mean bin Laden has the bomb. What it does mean is that state sponsors of terror, like Pakistan was (and to a lesser extent still is) have (or had) the motivation if not the means of passing on WMD to terrorist organizations.

Via Chad at In the Bullpen who has more analysis here. Sifi (Indian website):

Pakistani scientists Abdul Qadeer Khan and Sultan Bashiruddin Mehmood had held meetings with Osama bin Laden and other Al-Qaeda leaders, exchanged letters with militant organisations like the Lashkar-e-Toiba and attended their gathering
s and rallies, a media report said.

Some nuclear scientists working in the Khan Laboratories visited Osama bin Laden in Afghanistan before Sept. 11, 2001.

Khan sold hardware and divulged centrifuge technology in the three countries and, at least in Libya, provided a design for nuclear bombs. But crucial questions about the extent of Khan’s proliferation activities remain unanswered because the government of Pakistani President Pervez Musharraf – after arresting and pardoning Khan more than a year ago – has refused to allow him to be questioned directly by the CIA.
.