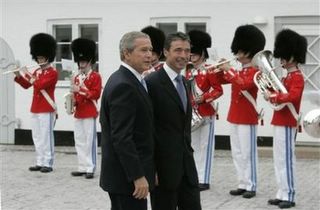 President Bush and Danish Prime Minister Anders Fogh Rasmussen arrive at the Prime Minister’s summer home. The band in the background is playing “Happy Birthday” to the President. George Bush made the stop in Denmark on his way to the G8 Summit in Edinburgh, Scotland, today. Denmark has been a staunch US ally in the War in Iraq.

The President who has helped liberate millions of Iraqis and Afghanis from oppression received his own “Liberation Present” from the Danes today.

The nine stamps, all postmarked on May 5, 1945, represent Denmark’s liberation from the Nazis after World War II.

The stamps, which bear pictures of, among other things, a seal, a polar bear and former Danish king Christian X, were produced in the United States, since relations between Denmark and its semi-autonomous territory Greenland broke down during the war.

Bush received the collection, which is estimated to be worth 7,000 kroner (1,120 dollars, 940 euros), during a celebratory breakfast with Rasmussen at his country residence Marienborg, just north of Copenhagen.