The London bombers have confirmed links to Al Qaida 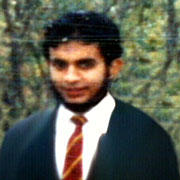 Sajid Badat (left), was arrested in 2003 with a “shoe bomb” in Gloucester, England. An associate of Richard Reid, he was planning a “spectacular” suicide attack in a crowded place.

Richard Reid (left) was jailed for life by a US court for trying to blow up a flight from Paris to Miami in 2001 by detonating an explosive device hidden in his shoe, a plot which failed after he was overpowered.

The explosives used in the London bombings may have been from the same batch as the shoe bombers Richard Reid and Saajid Badat:

The British-born mastermind of the London attacks had direct links with al-Qaeda, police sources confirmed yesterday.

He is believed to be connected to a senior figure who took part in an al-Qaeda terror summit in Pakistan 16 months ago where a list of future targets was reportedly finalised.

Forensic scientists said last night that the explosives used by the London bombers was the same type used by the convicted British shoe-bombers Richard Reid and Saajid Badat. Scientists hope to establish today whether it originated from the same batch.

It was made from ingredients known to be taught to al-Qaeda recruits in Afghanistan training camps and elsewhere, confirming suspicions that the London bombings were the work of al-Qaeda.

* * * * *
The London bombers were linked by a seized laptop to terrorists arrested last year in Pakistan:

The London attacks were connected to an al-Qaida plot planned two years ago in Lahore, Pakistan. Names on a computer that authorities seized last year from Muhammad Naeem Noor Khan, an alleged Pakistani computer expert for al-Qaida, matched a suspected cell of young Britons of Pakistani origin, most of whom lived near Luton, where the alleged suicide bombers met up on their way to London shortly before last week’s blasts, according to the report.

Authorities have now discovered ties between Mohammed Sidique Khan — one of the July 7 bombers — and members of that cell who were arrested last year, ABC said.