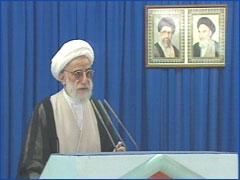 One of Iran’s most powerful clerics, Ayatollah Ahmad Jannati, who heads the powerful Guardian Council, the unelected constitutional watchdog, hinted during the Friday prayers that it was the British who bombed London:

Turning to the recent bombings in the British capital of London, he said that the West should be ashamed of such incidents which they are unable to stop.

“Al-Qaeda may have been responsible for the recent blasts. It is also likely that the British administration was behind it, as was the case with the Sept-11 bombings, in which the US was guessed to have planned it to gain the most benefit from it.

He noted that to find those responsible for the bombings, one should first realize who would benefit most of such incidents.

“Concerning the Sept-11 event, the US administration benefited more than any other group, while in this case the American and British administration themselves gained the greatest benefits,” added Jannati.

The July 7 multiple bombings in London’s underground railways and a city bus left at least 54 people dead and close to 1,000 people injured.

“The British government stood to gain the most from the London bombings, so that they could tell their people not to protest against their war on terrorism”, the senior ayatollah said.

Jannati’s comments echoed a similar speech at last week’s Friday prayers’ sermon by Ayatollah Mohammad Emami-Kashani, who blamed the bombings on the West.

The Organisation of al-Qaeda’s Jihad in Europe, an al-Qaeda offshoot, claimed responsibility for the attacks, but Emami-Kashani said that the West, in particular the United States and Israel, carried the responsibility.

“You who speak of al-Qaeda’s Islamic and terrorist nature, have you forgotten who are the mother and father of al-Qaeda”, the senior cleric questioned, in an address to the United Kingdom and the British Prime Minister Tony Blair. “Al-Qaeda’s father is in the White House and its mother is despotic Israel”.

But, a Chechen Rebel site is saying that Russia is connected to the terrorist attacks in London:

“Only mean purposes can be pursued by acts of terrorism. Chechens understand Londoners better, that anybody else, as we are terrorized by Russia for more than 10 years. The majority of our cities and villages are wiped out, and the quantity of the killed civilians is more than 200 thousand. We do not have any doubts that the terrorists, who attacked London , and the terrorist state apparatus of Russia have old communications, coordinate their actions and pursue one and the same purposes”.