The BBC, CNN, and FOX News chose not to carry this news. But, Al Jazeera puts the Egyptian protest against terror as their lead story.

1,000 Egyptians chanted “We will not be terrorized!” 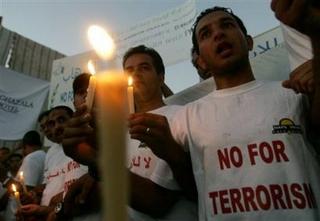 Egyptian workers vowed that they would not be terroriszed today as over 1,000 demonstrators protested in Shaem el-Sheikh:

“There is no God but God and terrorism is the enemy of God,” chanted the Egyptian protesters, including hotel chefs, technicians and road sweepers, as they marched along the main road of Sharm el-Sheikh, hit by three bombs on Saturday.

“The feeling is very sad and very angry. We are not going to be scared by the bombers,” said Sherif Saba, an Egyptian investor in the diving and beach resort. 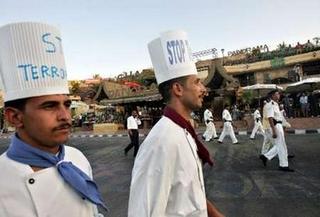 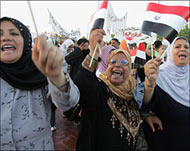 “People are against those who did this. They have no religion and are not from us, neither as bedouin or Egyptians. It’s a cowardly act,” said Saleh Mohamed, a south Sinai bedouin wearing flowing robes and a lilac headscarf.

The Bahrain Tribune is now reporting on the protest as well.
The Jordan Times mentions the Anti-terror protests. 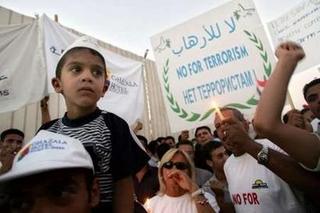 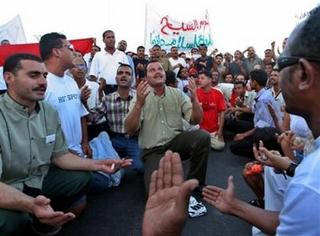 Egyptians stop and pray at their protest against terrorism in front of the blown-up Ghazala Gardens Hotel in Sharm el-Sheik, Egypt, on Sunday, July 24, 2005. (AP)

Are the people waking up in the Arab World? Are they rising up?

For More News on Egyptian Anti-Terror Protests:
Instapundit has been tracking another Egyptian protest organized by blogger Karim Elsahy.
Rantings of a Sandmonkey has a great post on the Cairo protest.
Big Pharoah of course was a major player!