* Rumors of a “Nukes for Oil” Program
* The closeness between Islamabad and Riyadh has been phenomenal
* It is not unlikely that Dr. Khan’s interaction with the scientists of Saudi Arabia were similar to those during his visits to North Korea.
* If he broke the rules with Noth Korea it would not be much of a stretch for him to break the rules with the Hause of Saud.
* Pakistan denied rumors earlier this year that it had sold technology to Saudi Arabia which is why the recent behavior raises suspicions.

** The possibility that Prince Turki, considered close to both Osama as well as AQ Khan, played a role in a nuclear deal between Osama and Khan cannot, consequently, be ruled out! ** 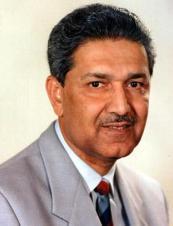 A recent article in The Pakistani is mentioning suspicious behavior from President Musharref and The Kingdom and wondering if the Saudi’s were nuclear shopping from the Father of Paksitan’s nuclear weapons program, AQ Khan:

These diplomats believe the visit was meant to seek the assistance of the Kingdom to circumvent the ongoing International Atomic Energy Agency (IAEA) investigations into reports that the Saudis might have purchased nuclear technology from Pakistan. The Musharraf-King meeting was aimed at chalking out a joint strategy on what stance the two leaders should adopt to satisfy the IAEA and address its concerns.

Saudi Arabia has been under increasing pressure to open its nuclear facilities for inspection as the IAEA suspects that its nuclear program has reached a level (with Pakistani cooperation) where it should attract international attention. The pressure has also come from Europe and the United States, who want Riyadh to permit unhindered access to its nuclear facilities.

Well before the IAEA probe began, the US had been investigating whether or not the father of Pakistan’s nuclear program, Dr. AQ Khan, sold nuclear technology to the Saudis and other Arab countries. Acting under extreme pressure of the IAEA, the Saudi Government signed the Small Quantities Protocol (SQP) on June 16, 2005, which makes inspections less problematic. However, the US, European Union and Australia want it to agree to full inspections. The Saudi stand is that they would agree to the demand only if other countries did so, including Israel.

Last year’s unearthing of the black market nuclear technology network increased international suspicions that Khan had developed ties with Riyadh, which has the capability to pay for all kinds of nuclear-related services. Even before the revelations about Dr. Khan’s activities, concerns about Saudi-Pakistani nuclear cooperation persisted, largely due to strengthened cooperation between the two countries. In particular, frequent high-level visits of Saudi and Pakistani officials over the past several years raised serious questions about the possibility of clandestine Saudi-Pakistani nuclear cooperation…

…Following Khan’s first admission of proliferation to Iran, Libya and North Korea in January 2004, the Saudi authorities pulled out more than 80 ambassador-rank and senior diplomats from its missions around the world, mainly in Europe and Asia. The pull out is widely thought to have been meant to plug any likely leak of the Pak-Saudi nuclear link.

Before 9/11, Saudi Arabia, UAE and Pakistan were the only countries that recognized and aided Afghanistan’s Taliban regime, which had been educated in Pakistan’s religious schools. Despite the fall of the Taliban regime, the Saudis continue to fund these seminaries that are a substitute for Pakistan’s non-existent national education system and largely produce Wahabi extremists and Islamist militants. Also, a substantial proportion of their curricula, including the sections which preach hatred, has also emerged from that country…

…Just after the visit of Dr. AQ Khan to Saudi Arabia in November 1999, a Saudi nuclear expert, Dr. Al Arfaj, stated in Riyadh that “Saudi Arabia must make plans aimed at making a quick response to face the possibilities of nuclear warfare agents being used against the Saudi population, cities or armed forces.”

One cannot, therefore, avoid the inference that, like the Pak-North Korean “nukes for missiles deal”, Dr. Khan might have struck an “oil for nukes” deal with Saudi Arabia on behalf of Islamabad at a time when there is a growing homogeneity of strong Pan Islamic affiliations worldwide. If Dr. Khan’s interaction with the scientists of Saudi Arabia, Iraq and Libya were similar to those during his reported visits to North Korea, norms of the nonproliferation regimes may have been violated.

The possibility of Turki having played a role in a nuclear deal between Osama and Khan cannot, consequently, be ruled out, especially when many members of the Pakistani military and nuclear establishments have been found involved in holding meetings with the al-Qaeda leader.

In the post-9/11 period, analysts continue to express fears about the possibility of extremist Islamic groups like al-Qaeda gaining access to Pakistan’s nuclear weapons or fissile or radioactive materials. Secret deals with Saudi Arabia can only aggravate such risks and concerns.

This article is also on record at the “South Asia Intelligence Review” in the July 4, 2005 edition.

“The Jawa Report” had noted the allegations on April 5th. The latest events raise new questions.