At least 16 St. Louis area Democrats have been found guilty of election crimes in the last 7 months! 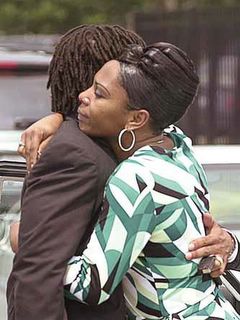 Sheila Thomas hugs Defense Attorney Paul Sims yesterday. Thomas was convicted of conspiracy and vote fraud and faces up to five years in prison for each charge.

Convicted of one count of conspiracy to commit vote fraud during the Nov. 2 election was Charlie Powell Jr., head of the city’s powerful Democratic Central Committee and a former city council member. He faces five years in prison.

Convicted of conspiracy and vote fraud and facing five years on each count were: 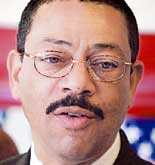 Rudy McIntosh lost his job as a police officer last month. He testified against the defendents in the vote fraud case. He has lost his job in the police department.

The undercover tapes obtained by Rudy McIntosh convinced the jurors of guilt.

With the authorities still investigating this may not be the end of the indictments.

Democrats are saying the convictions announced Wednesday do not represent their party.

I beg to differ!!

In the last 7 months in the St. Louis Metro Area here is a slice of what we have witnessed:

December: In St. Louis Six volunteers pleaded guilty in December of dozens of election law violations for filling out the cards with names of the dead and other bogus information. One still faces charges.

February 10: In St. Louis Nonaresa Montgomery was found guilty by a jury of perjury in a trial in St. Louis Circuit Court in the St. Louis vote fraud trial.

June 29: All five defendants are convicted on all counts.

That comes out to 16 different Democrats convicted of election violations in the last 7 months in the St. Louis area!

That does not include all of the convictions.

And, one Democrat is still being held for attempted murder (trial scheduled for Oct. 17) of a government witness!

The Chicago Sun Times reported on the story yesterday.

File this post under “As seen only in the blogs, right at that!”

* Much more background on the latest conviction HERE. *