HERE IS A PAGE WITH VIDEO OF PRESIDENT BUSH’S SPEECH WITH INDIAN PRIME MINISTER SINGH. 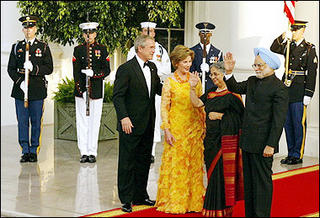 The charm offensive included the equivalent of a state dinner, making Singh only the fifth foreign leader to get the black-tie treatment since Bush took office.

India and the United States share a commitment to freedom and a belief that democracy provides the best path to a more hopeful future for all people. We also believe that the spread of liberty is the best alternative to hatred and violence. Because of our shared values, the relationship between our two countries has never been stronger. We’re working together to make our nations more secure, deliver a better life to our citizens and advance the cause of peace and freedom throughout the world.

Prime Minister Singh gave a speech of his own at the press conference with Bush:

The President’s steadfast determination and leadership in meeting the challenges of international terrorism is widely appreciated by us, in particular, but all the world, all civilized men and women all over the world. There can be no cause that justifies the killing of innocent and defenseless civilians. There must be an international norm of zero tolerance for terrorists.

BTW- Notice the first question the president gets at a news conference with the Indian Prime Minister! The Freekin Rove-non-scandal!