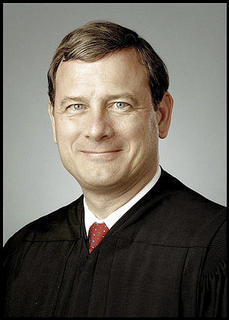 Bush offered the position to Roberts in a telephone call at 12:35 p.m. after a luncheon with the visiting prime minister of Australia, John Howard. He was to announce it later with a flourish in a nationally broadcast speech to the nation.

Roberts has been on the U.S. Court of Appeals for the District of Columbia Circuit since June 2003 after being picked for that seat by Bush.

Polipundit is quoting the Volokh Conspiracy with one of Judge Robert’s legal briefs that will make the liberals squirm!

Senator Schumer (D-NY) is saying that, “Judge Roberts has only been on the Washington Court for 2 years and that he has to answer many questions in the following “months”!
Dear God! Tell me this won’t take “Months”?!!