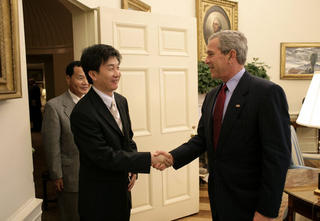 President Bush met with Chol-hwan Kang to the Oval Office Monday, June 13, 2005. Mr. Kang is the author of, “The Aquariums of Pyongyang: Ten Years in the North Korean Gulag.” Mr. Kang defected from North Korea and now lives in South Korea and works as a journalist. (White House photo by Eric Draper)

His story of a decade in a North Korean prison camp moved President Bush to seek his advice on how to deal with the communist country – a meeting that incited the Pyongyang regime to condemn Kang Chol Hwan as “human scum.”

Now, the defector whose memoir has drawn renewed attention is calling on the international community to press the North to improve its widely condemned human rights record, a problem Kang argues must be solved before Pyongyang’s nuclear standoff with the world can end.

“If this cruelty isn’t stopped, what is the international community for?” Kang, 36, asked in an interview with The Associated Press on Monday. “If there is no democratization of North Korea, the nuclear issue won’t be resolved.”

Kang is author of “The Aquariums of Pyongyang,” named for his hobby of tending fish before he was sent to prison along with his family at age 9.

Originally published in French with editor Pierre Rigoulot, the book’s English edition, released in 2001, made it onto Bush’s reading list. Bush invited Kang for a 40-minute meeting in the Oval Office this month and asked him what he would do about North Korea if he were president.

Kang urged Bush to press China to stop forcefully returning North Korean refugees, who Beijing views as illegal economic migrants. He also pressed Bush to raise the issue of prison camps in the North, where the State Department estimates 150,000 to 200,000 political prisoners are being held.

Human rights is the only issue where outside pressure can have an effect, Kang argued, saying North Korean leader Kim Jong Il will decide on his own whether to keep nuclear weapons that his regime insists are for self defense.

New Mongols also reported on the living situation in North Korea this week.

Today in Tokyo, Japan, Secretary of State Condoleezza Rice said that North Korea must give up Nukes:

U.S. Secretary of State Condoleezza Rice says North Korea must be ready to forgo nuclear weapons if six-party talks to be held this month are to succeed.

“What we really need is a strategic decision on the part of the North (Koreans) that they are indeed ready to give up their nuclear weapons because without that these talks cannot be successful,” Rice said at a news conference on Tuesday with Japanese Foreign Minister Nobutaka Macjimura. 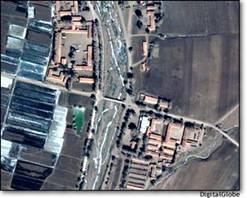 This is a picture of a North Korean Gulag. The gulag holds some 200,000 individuals including whole families who are accused of political crimes.

South Korea is set to ship rice to the North.

And, South Korea is offering electricity to North Korea if they resume 6 Party Talks and renounce nuclear weapons.

North Korea has agreed to give a detailed response to a US-led aid-for-disarmament proposal when it returns to nuclear talks later this month, senior US administration officials said.

The one-year-old proposal, which Washington says is comprehensive but Pyongyang sees as too stringent, is key to the success of the six-party talks comprising the United States, the two Koreas, Japan, Russia and China.

North Korea’s Deputy Foreign Minister Kim Gye Gwan agreed in a surprise move Saturday that Pyongyang would return to the negotiations from July 25, after the talks were stalled for more than a year.

One Free Korea continues to lead the blogosphere with news on North Korea. And, you have to love this line from their header “A country can not long remain half slave and half free!” by Abraham Lincoln.

Update: Since there were no shark attacks in the news today, Instapundit has linked here.