We know what “Radical Islam” is already,…
So is this “Moderate Islam”? 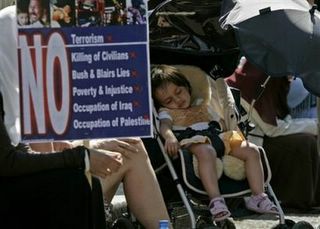 British Muslims hardly look repentant with signs like this at their London protest today.

George Galloway wrote about the “real reasons” behind the terror strikes in London yesterday. He spoke to the a British Muslim group today:

“People killed in explosions by razor-sharp red-hot steel and splintering flying glass die the same death whether they are in London or Fallujah. When the US armed forces, their backs guarded by our armed forces, reduced Fallujah to rubble not a whisper found its way into the House of Commons.”

“A swamp of hatred towards this country has been watered by the invasion and occupation of Iraq, by the daily destruction of Palestinian homes and by the occupation of Afghanistan.”

“The enmity generated by those great events feeds the terrorism of bin Laden and the other Islamist terrorists. Is that such a controversial point?” 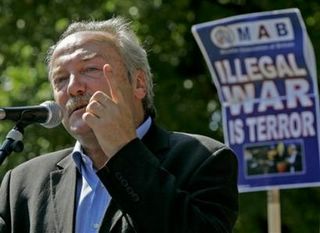 The Muslims of Britain picked the wrong guest speaker in George Galloway if they were trying to convince the world that they are sorry for the bombings on 7/7.

Left-wing Labour MPs have linked the bomb attacks that shook London on July 7 2005, to the war in Iraq.

They said they would use a one-day conference, that was scheduled to be held in London, to step up the pressure on the British Prime Minister Tony Blair to hasten the withdrawal of British troops from Iraq.

Also in a television interview, Clare Short, the former cabinet minister, said she “had no doubt” that London bombings were connected to Iraq war.

Ms. Short coupled her condemnation of the bloody bombings with criticism of Britain’s foreign policy.

In a recorded interview for GMTV, she said “some of the voices that have been coming from the Government that talk as though this is all evil, and that everything we do is fine, when in fact we are implicated in the slaughter of large numbers of civilians in Iraq and supporting a Middle East policy that for the Palestinians creates this sense of double standards”. 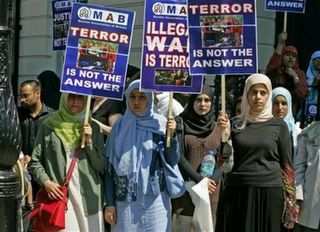 Demonstrators from “Stop the War Coalition” and the “Muslim Association of Britain” rally in protest against the London bombings in Russell Square, London, July 17, 2005 while blaming the US and Britain for an Illegal War in Iraq. It makes you wonder how many Brits are impressed with the sign, “Illegal War is Illegal Terror”, now?

Tony Blair in a speech yesterday rebutted such a notion as his ex-minister Short, but another Muslim politician is not so clear:

“If it is Iraq that motivates them (Islamic extremists), why is the same ideology killing Iraqis by terror in defiance of an elected Iraqi government?” he asked.

Blair was backed on Sunday by lawmakers from both his own Labour Party and the main opposition Conservatives.

Sadiq Khan, a British-born Muslim who is Labour MP for a constituency in London, said it was “very dangerous” to blame the bomb directly on Iraq.

“It’s a very simple and easy thing to do, to say this would not have happened but for A, B and C, whether it’s the war in Iraq, whether it’s what’s going on in other parts of the world where Muslims are suffering,” he told GMTV.

What’s that?… Sounds like Sadiq wants it both ways!

Since George Galloway is equating the ‘Iraq War with terrorism’, here is my ‘moral equivalence’ for the day…

“No Speed Bumps” has his own rules for military engagement that sound more reasonable.