Up to 10,000 demonstrators protested Friday in Bahrain. 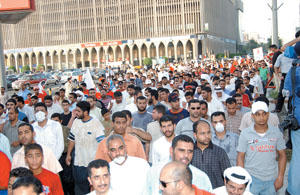 The Bahrainis were out in force yesterday demonstrating for political reform in the small Kingdom of Bahrain:

About 10,000 people, with their mouths covered, passed by the Government House in Manama, calling upon all societies to work together to ensure that the law is either withdrawn or replaced with a more modern law, organisers of the rally said.

The protesters stressed that the law should acknowledge the ideals of a true political environment and political group activities on the basis of a democratic set-up accepted by the international community.

The protest march culminated in a meeting at King Faisal Park, where Al Wasat Al Arabi Society president called upon the participants to exert pressure on the government and mobilise public opinion to stop the government and its supporters from issuing other laws that aimed to curb freedoms such as the laws on organising rallies and combating terrorism.

There have been several protests this year in Bahrain pushing for reform. 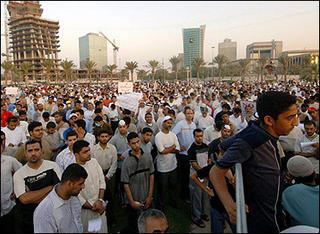 Bahrain protesters took to the streets today to demonstrate against a new law that restricts political parties in the country:

About 4,000 activists demonstrated to protest the ratification of a law regulating political associations in Bahrain, which opposition groups said will restrict their activities.

Many protestors had tapes on their mouths as they marched toward the seat of the government in the center of Manama.

“The law is another step back on the way to free opinion,” said Jassem Al-Mehzea, head of the Al-Wassat opposition association.

The law was passed by parliament early this month and ratified by King Hamad last Saturday.

The associations, which stand in place of banned political parties, said the law would restrict their funding by banning donations from foreign countries.

Opposition groups also object to a provision raising the minimum age to join associations from 18 to 21.

Bahrain has been pushing for democracy all year with demonstrations 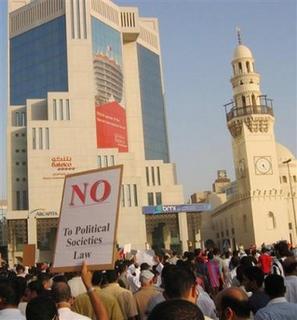 Great minds think alike! I see that Robert Mayer at Publius Pundit is reporting on the protest in Bahrain as well.