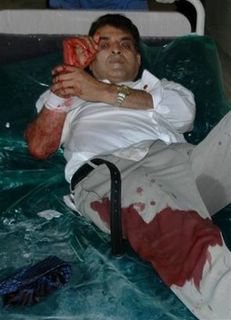 Bahraini Ambassador to Iraq, Hassaan al-Ansari, was shot earlier in the week in an attempted abduction.

The group, which claimed responsibility for the kidnap on Tuesday, displayed his driving licence, foreign ministry and health insurance cards on an Islamic website, as proof that they are holding him hostage.

El-Sherif was kidnapped on Saturday evening as he went to buy a newspaper in Baghdad, just weeks after taking up his post in Iraq. Like the statement issued on Tuesday, Wednesday’s message was very short, and did not contain any ransom demands in exchange for his release.

Since his kidnap there have been other attacks on diplomats in Iraq. On Tuesday a Bahraini and Pakistani diplomat were attacked in what are believed to have been other abduction attempts. Hassaan al-Ansari, the charge d’affaires for the Bahraini embassy, was shot during the attack, but has now been repatriated and promoted to ambassador by the King, in honour and appreciation “for what he has done for his country,” said the official Bahraini news agency BNA.