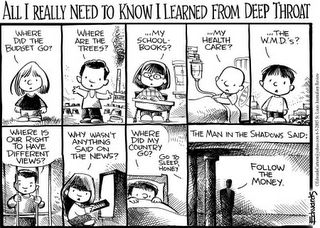 I like #6! The one with the kid behind bars saying, “Where is our right to have different views?” This from the George Soros sponsored Conference on Media Reform held here in St. Louis last month. The St. Louis Journalism Review keeps the conference alive in their June edition.

I love that one! The one with the kid behind bars saying,

“Where is our right to have different views?” (oh, waa!)

Why is it that the Left doesn’t understand something I learned in pre-school, when I got a good spanking for saying “fart”, and again in 3rd Grade when “Sister Catherina of the Left Uppercut” introduced me to her knuckles for calling my buddy an “asshat”, that…

“Freedom of Speech does not mean there will be no consequences for what we say!”

You have the “right” to say any silly, slanderous, grotesque, untrue,… thing you can think of,… but, baby, there’s going to be consequences!

It’s about time someone explained this to the left. They believe that you can make “Bush” jokes, that you can repeat that our military was using napalm in Fallujah, that you can claim that the war was concocted in Texas, that you can say our soldiers are no better than Nazis, and there ought not be any consequences!

They also believe that when they lose elections because most Americans don’t believe in their socialist, weak on defense, tax raising, atheist, partial birth aborting views, that they again are being unjustly persecuted,… imprisoned even!

It is a blessing that we live in a country where we have the wonderful freedoms that we do. And, it is wonderful that we will not be imprisoned for using our right of free speech.

But, just once, though, it would be fun to watch a few of America’s finest pull up in front of one of their conventions, or awards ceremonies, and watch Guantanamo interrogators drag them down the red carpet in reverse and cram them into the back of a paddy wagon! Now, that would be a sight! I know I’d pay to see Bill Moyers, Al Franken, and Danny Glover ride down to the slammer on Tucker Boulevard (and hit a few speed bumps on the way!) if only for a couple hours just to scare the be-Jesus out of them!