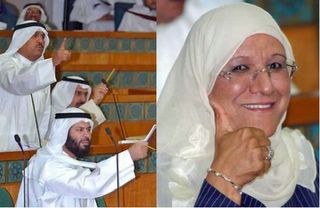 Kuwait’s first female minister, Maasouma al-Mubarak, was sworn into office today, but not without loud shouts and screaming from the opposition.

The first female Cabinet member was sworn into office today in a raucous session of Parliament with men for and against her appointment shouting as she took her oath of office:

Kuwait’s first female Cabinet member took the oath of office in parliament Monday over the shouts of Muslim fundamentalist and tribal lawmakers opposed to women in politics.

The parliament floor was in uproar as conservatives stood and cried out that Massouma al-Mubarak’s appointment was unconstitutional because she was not a registered voter. Liberal lawmakers then stood as well, shouting back, “Congratulations.”

Amid the din, al-Mubarak — dressed in a pinstriped dark blue pantsuit, and an Islamic veil that covered her hair — rose from her seat in the front row and read the oath from a paper seemingly unaffected by the screaming match.

The U.S.-educated political science teacher was named as minister of planning and administrative development June 12, a month after Kuwait’s parliament gave women the right to vote and participate in politics for the first time.

Massouma was given the planning and administrative development post on June 12th a month after Kuwait’s parliament gave women the right to vote and participate in politics for the first time.

Massouma al-Mubarak, the new planning minister, described her appointment as a “great victory” for Kuwaiti women.

“It’s a great day for Kuwaiti women who have struggled and persevered persistently to gain their full political rights,” said Ms Mubarak afterwards.

“In my name and in the name of Kuwait’s women… we greatly appreciate the honest efforts exerted in support of the legitimate demands of Kuwait women.”