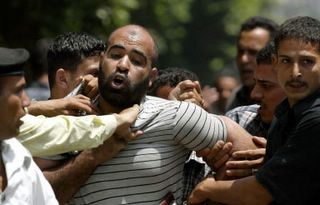 The Kefaya Opposition Group in Egypt may go to the World Court to seek justice for the violence at last week’s rallies.

During the referendum elections last week in Egypt an Opposition Protest in Cairo broke out in violence with Opposition supporters being beaten and women groped. (see Publius Pundit and Enough! for more on the unrest) Today the Kefaya Opposition Party threatened to go all the way to the World Court if the government did not take action against those responsible:

“We want all those responsible in the (ruling) National Democratic Party (NDP) to be taken to justice. If Egypt’s justice doesn’t protect and defend us, we will go to the world court,” Kefaya’s leader George Isaac told reporters.

Kefaya’s activists and journalists were attacked, while women were sexually assaulted, by NDP supporters at rallies against a May 25 referendum on constitutional reform.

The government played down as “emotional tension” the beating and sexual groping of the women, some of which was caught on video, but US President George W. Bush himself criticized the clubbing of the protestors.

“They hoped Kefaya would be silenced, that women would be silenced but we’re not afraid, we will continue to protest until this corrupt regime falls,” Kefaya woman activist Karima Hifnawi told the press conference. 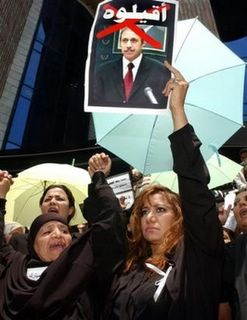 Nawal Ali, one of the Egyptian women who was molested at a rally last week.

Also, Thursday an estimated 500 demonstrators rallied on the steps of the Press Syndicate in Cairo in reponse to the groping allegations against women from last week’s protest:

Hundreds of black-clad men and women wearing white ribbons on their lapels gathered outside Cairo’s Press Syndicate Wednesday to protest the assault of several women during last week’s referendum.

They were waiving banners asking for the resignation of Interior Minister Habib al-Adli and Cairo’s head of security Nabil al-Ezabi, whom they hold responsible for the violence.

“Violating the dignity of women is like violating that of our country,” and “our colleagues’ dignity is part of the country’s dignity,” other banners read.

The “White Ribbon national apology campaign” was launched following the molestation last week, while other women called on people to wear black to protest “police brutality, beating and sexual harassment”.