Time is running out for Ethiopia. The government is due to announce the results on July 8, and unless we have a big contingent of press and international observers stationed in Ethiopia, we would be letting a country of “71 million people” descend into authoritarian rule. Democracy and liberty will be irreparably tarnished.

40% of Ethiopia’s Population belong to the Ethiopian Orthodox Church, or Coptic Church. 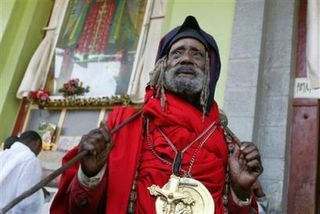 An Ethiopian Priest outside Teklehaimanor church in Addis Ababa prepares for Service last weekend. The city seems to be returning to a normal routine although tension in the streets remains high.

Today “Young Ethiopian Diasporans” gave me a lesson plan of Four Easy Steps on how a “Capitalist on the Outside, Communist on the Inside” Prime Minister can turn the hands of time back on democracy:

2.) Make sure that the press that decides to stay is “thoroughly” intimidated… the key word here being, “thoroughly”.

3.) Still having problems controlling the masses, you say? Try this…

4.) Finally, you can always fall back on mass arrests. And, don’t forget to arrest the Human Rights Investigators looking into your crimes!

As a side note… The timing of this process is not important. In fact these four steps were completed after the government signed a pact with the opposition that condemned all violence and to use great restraint of control. 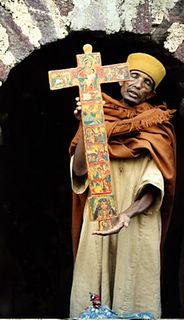 As the psalmist exclaimed in the Bible, “Ethiopia Shall soon stretch out her hands unto God’s”, the people in Ethiopia wish for progress and democracy. During the Red Terror (1975-78) in Ethiopia over 200 thousand Ethiopian Orthodox monks were executed in Ethiopia.

Weichegud! has all the dirty details from the past week in Ethiopia.

Other Developments this week:

* Britain suspended a planned $36-million increase in aid to Ethiopia and called for the government to give Red Cross workers access to detainees.

* U.S. officials have urged restraint and are working behind the scenes to pressure the government to settle the dispute peacefully.

* A newly elected opposition lawmaker, allegedly shot by police, was among the dead.

* The international backlash poses a serious challenge to Prime Minister Meles Zenawi, whose party seized control of Ethiopia in 1991.

* The Ethiopian government has blamed the violence on “looters,” “hooligans” and the leading opposition party.

Professor Solomon Terfa from Mississippi Valley State University writes an Open Letter to the EU, African Union and Carter Center. Professor Terfa asks that these organizations declare the election null and void due to vote tampering as the Internatinal Community did with Ukraine.

And, here is the EU’s Assessment of the Electoral Process in Ethiopia.

Update: Glenn Reynolds at Instapundit continues to let the world know about Ethiopia.