* Another group of Pro-Democracy Activists are detained in Myanmar *

VIDEO OF “THE LADY” BEFORE HER ARREST HERE
This video shows a lovely and beautiful side of the courageous woman we here about.

And, mourning 2,523 days of her arrest and detention… 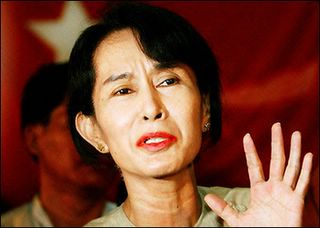 President Bush sent best wishes to Daw Aung San Suu Kyi on her birthday weekend and looks forward to the day when Burma is democratic and free. Suu Kyi’s National League for Democracy Party scored a landslide victory in the 1990 elections in Burma, but the junta never allowed the winners to take office. She has been under arrest for much of the time since then:

US President George W. Bush said he looked forward to a time when Myanmar “is democratic and free” as he wished democracy activist Aung San Suu Kyi a happy early birthday.

“I send my best wishes to Daw Aung San Suu Kyi for her 60th birthday, June 19,” Bush said in a written statement released by the White House as he traveled here to promote his domestic agenda.

“Her strength, courage, and personal sacrifice in standing up for the oppressed people of Burma have inspired those who stand for freedom,” said the US president.

The 1991 Nobel Peace Prize winner has been confined to her home in Yangon for the past two years in her third stint under house arrest. She has spent nearly a decade in detention since taking up her pro-democracy cause in 1988.

The Europeans will be celebrating the birthday of an extraordinary and courageous woman today as Aung San Suu Kyi turns 60 in Myanmar:

Officials, former leaders and prominent organisations in Europe added their voices to a worldwide call to Myanmar’s ruling junta to release democracy activist Aung San Suu Kyi as she prepared to mark her 60th birthday under house arrest.

Norway’s Nobel Committee, which gave Suu Kyi the Nobel Peace Prize in 1991, called attention to her plight and called for her to be freed immediately.

The European Union’s foreign policy chief, Javier Solana, issued a letter to Suu Kyi in which he wrote: “I together with millions of European citizens have admired your struggle over many years for decent democratic governement.”

On Thursday, British Foreign Minister Jack Straw also criticised the activist’s treatment at the hands of the junta in Myanmar, a resource-richt country which was formerly known as Burma.

“Her treatment by the Burmese authorities is indefensible and I urge them to release her and the 1,300 other political prisoners immediately,” he said.

The Norwegian Burma Committee said it would hold demonstrations in front of the Norwegian parliament as well as in a number of towns across the country on Sunday and has organised a petition for her release that has been signed by the Dalai Lama, among others.

In Sweden, representatives for all of the parties represented in parliament expressed to Suu Kyi their “deepest respect for your courage and loyalty to the struggle for democracy for the people” of Myanmar. A demonstration was to be held in central Stockholm on Friday.

The Danish Burma Committee said it was organising a birthday party for Suu Kyi in a Copenhagen cafe that would be attended by orchestras, artists, left-wing politicians and children.

In the Czech Republic, the Myanmar community and the Multicultural Centre organisation were to hold a meeting Saturday before joining the worldwide campaign for Suu Kyi. 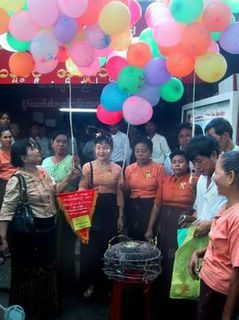 Myanmar’s National League for Democracy (NLD) was preparing to celebrate the 60th birthday of their detained leader today.

The Myanmar government said Sunday that it is shaping the nation as a “discipline-flourishing” democratic one.

And, on Friday a member of the United States House of Representatives sent special words of encouragement to Aung San Suu Kyi:

“I have dealt with dictatorial regimes all of my life,” Rep. Tom Lantos, the only Holocaust survivor ever to serve in Congress, said Friday. “I don’t expect any warm reception from them.”

Asked what message he would have for Suu Kyi, who will spend her 60th birthday Sunday under house arrest in her home country, as she has spent most of her last 15 birthdays, Lantos said, “I want Aung San Suu Kyi to know that the entire Congress of the United States of America and the American people are with her today wishing her a happy birthday and the moral and physical courage to continue.”

Update: (Sunday PM) Instapundit has linked to this democracy news. Earlier this weekend Glenn Reynolds posted this link up “Vaclav Havel on Burma and Cuba” with comments from Vaclav Havel via Chicago Boyz. Vaclav wins the prize for best birthday wish to Aung San Suu Kyi (and has some pretty good words about Castro as well!)…

As Aung San Suu Kyi celebrates her 60th birthday, I wish for her that those changes will happen as soon as possible, and that my silly idea — to hand her a rose — becomes a simple and easy thing to do.