Voters hope that this election will restore stability and increase development in one of the world’s poorest countries. 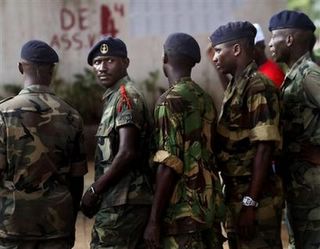 Soldiers line up to vote in Guinea-Bissau today for the first democratic vote since a coup in 2003. Thirteen candidates were vying for president including the man the military oused two years ago.

Few incidents reported in Guinea-Bissau today in the first election since 2003, despite fears of unrest:

Voters in the west African state of Guinea-Bissau turned out in large numbers to cast their ballots in the first round of a presidential election aimed at ending almost two years of political transition.

Few incidents were reported, with long lines of electors forming in the capital Bissau from early morning. Polling stations closed at 5:00 pm (1700 GMT), with the National Electoral Commission (CNE) reporting a strong turnout.

“While we have noted a strong turnout today, we are still not able to give figures,” Vera Cabral Monteiro, the commission’s executive secretary, said.

Observers said that voting had taked place throughout the country in satisfactory conditions, in contrast to the legislative elections of March 2004 which were marked by delays and technical problems, especially in the capital.

This election is a real test for democracy in this west African nation:

Polls opened peacefully in Guinea-Bissau, Sunday, after weeks of intense campaigning. Election observers reported no problems, and military personnel were asked to leave the polling places after voting.

Most polling stations opened on time at 7:30 in the morning, with long lines of voters already waiting to cast their votes in the capital, Bissau.

People were reassured by a communiqué read over national radio Sunday morning by the head of the armed forces, asking the military to return to their barracks after having done their duty and voted.