AIDS is now the leading cause of death. 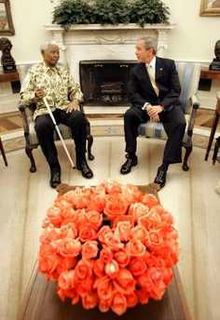 Mandela backs Bush’s Call for global liberty but not necessarily his “methods”.

Nelson Mandela had a twenty minute visit with President Bush on Wednesday to discuss the AIDS epidemic in his homeland. A new report has listed AIDS as the leading cause of death in South Africa today:

HIV/AIDS is the leading cause of death in South Africa, according to a new Medical Research Council (MRC) report on cause-specific death rates for each of the country’s nine provinces.

Findings from the report, ‘Estimates of Provincial Mortality’, show that while overall rates and causes of death differed, AIDS was the number one cause of death in all provinces except the Western Cape, which has the lowest HIV prevalence figures in the country.

The high death rate “highlights the urgency to accelerate the implementation of a comprehensive plan for the treatment and prevention of HIV and AIDS,” the MRC commented.

According to the report, these estimates were for 2000 and it was likely that deaths due to AIDS had increased over the last few years.

Not long ago in 2000, South African President Mbeki had doubts both about the link between the HIV virus and AIDS and the extent to which the disease has spread in South Africa. In 2000, Mbeki pushed back the publication of the Medical Research Council because he did not agree that AIDS was the leading cause of death in the country.