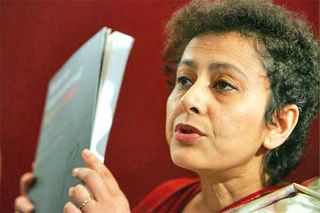 “Secretary General” of Amnesty International, Irene Kahn, blames the US.

First,… the Amnesty International Report “Findings” that came out today…

Findings from the Report:

UNITED STATES: Hundreds still held without charge or trial at Guantanamo Bay Naval base. Thousands detained during U.S. operations in Iraq and Afghanistan and routinely denied access to families and lawyers. Evidence emerged that U.S. sanctioned interrogation techniques that violated U.N. Convention Against Torture. More than 40 people died after being struck by police stun guns; the death penalty continued.

Amnesty International based in New York took aim at the US again today in their yearly report.

Amnesty International branded the U.S. prison camp at Guantanamo Bay a human rights failure Wednesday, calling it “the gulag of our time” as it released a report that offers stinging criticism of the United States and its detention centers around the world.

The 308-page report accused the United States of shirking its responsibility to set the bar for human rights protections and said Washington has instead created a new lexicon for abuse and torture. Amnesty International called for the camp to be closed.

* At any given time, the Gulag held 2.5 million or so people, but turnover was fantastic, given the many short sentences and releases. Once-secret reports record 18 million convicts passing through the camps between 1929 and 1953.

* Between one-quarter and one-third were “politicals”—that is, fabricated “counter-revolutionaries,” innocents.

* The overwhelming majority consisted of “criminals,” a category that included unfortunates who were a few minutes late to work or engaged in survivalist “speculation” as well as thieves, rapists, and murderers.

* Incarcerated musicians, actors, ballerinas, and opera singers performed on demand for camp bosses, whose commemorative photo albums constitute the Gulag archive’s perverse treasure. It was a multinational, wretched, grotesque world, with its own convoluted customs and inventive argot, set apart from, yet intimately linked to, the rest of Soviet society. “He who has not been there will get his turn,” says the labor camp proverb quoted by Applebaum. “He who has been there will never forget.”