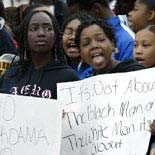 Britttany (l) and Ashlie Vickers (r) whose new fight is to graduate.

The organizer of the student protest last week that shut Riverview Garden High School down for a number of days has a new fight. Ashlie Vickers organized “peaceful” marches to City Hall where students damaged public property and officers arrested at least 4 brawling students. But, when classes did resume at the school after 3 days of walkouts, school officials noticed that Ashlie and her sister Brittany were not abiding by district rules. They were then suspended from classes. Their mother is not pleased with the school district:

Ashlie Vickers, who led a three-day protest of the dismissal of her high school principal, will miss her senior picnic today unless her family can get an injunction that would reverse a decision to expel her and her sister because they do not live in the Riverview Gardens School District.

Ashlie also could miss Thursday’s senior awards dinner for graduates with grade-point averages of 3.5 or better at Riverview Gardens High School. If the expulsion stands, she will be unable to graduate.

“I want the girls back in school to complete the school year,” Donna Vickers said. “I think (the district is) just playing games. It doesn’t seem like they are concerned about the children’s education.”

At a board meeting Tuesday night, parents distributed handbills in support of Ashlie and Brittany. One showed a girl and read, “Will I graduate? The clock is ticking.” Another showed three people, labeled as A. Vickers, B. Vickers and C. Ukaoma, being lynched, with an appeal to “Let them be free.”

Hmm… So, what does living outside the district and therefore breaking the district rules have to do with a “public lynching”? A rule is a rule. Ashlie may be an honor student but this young child still has a lot to learn about behavior and consequences. And, with the mother she has who cries “racism” and even “lynching” when pinned in a corner by her own doing, I see that this may be one lesson plan where Ashlie could fail.