The US is urging an international probe of the massacre. 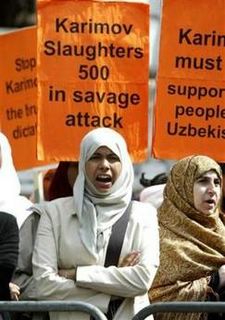 An Uzbekistan Protest Wednesday in London.

An Uzbek Protest was also held Wednesday at the Washington DC Embassy:

A protest was held in Washington DC today to ask embassy officials to lawer the flag for those killed in violence this past weekend in Andijan:

Representatives of the Uzbek Community from Washington, DC and New York City as well as sympathizers have gathered this afternoon in front of the Embassy of Uzbekistan to pay their respects to all the victims of Andijan events last weekend.

About 20-25 participants stood in front of the Uzbek embassy waiting for the officials to come out. The organizer of the vigil, Nigina Malikova along with two other members of the Uzbek community went up to the doors of the embassy hoping to speak to the staff, however, the embassy did not respond.

The participants of the vigil wanted to ask the embassy officials to lower the flag in respect to lives taken by this bloody event. Lives on both sides, peaceful civilians and the government forces. Unfortunately the participants were unsuccessful in getting the response, which was expected. 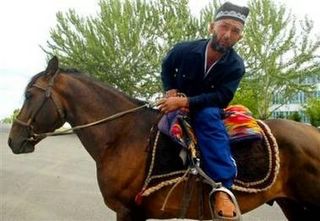 Earlier this morning government officials took control of the town away from Rakhimov and the rebels:

They said about 1,000 government forces occupied Korasuv, a town of 20,000 on the border with Kyrgyzstan, overnight, arresting the rebel leader Bakhtiyor Rakhimov and several aides, who had announced a plan to rule according to Islamic law.

No shots were fired, according to local residents. 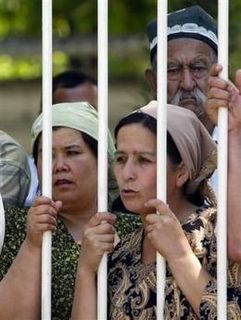 Locked outside the hospital walls from seeing the wounded.

The story behind this massacre is starting to take shape. One of the political prisoners who escaped to a refugee camp in Kyrgyzstan is telling his story:

He was the first businessman rounded up in a series of arrests that later sparked a bloody jailbreak, mass protests and soldiers slaughtering hundreds of people in the streets.

His version of events was backed up by several others who escaped to Kyrgyzstan and now sit in a makeshift camp, guarded by friendly Kyrgyz soldiers.

His mother, brother, sister, wife, four children and two grandchildren remain somewhere inside Uzbekistan, and he’s unsure of their fate.

The government seized his business and his car shortly after he was arrested in June. He was taken to an interrogation centre, where he spent the next 50 days.

Later they took him to Andijan prison, where he spent the rest of the year in a cell two metres wide and four metres long. It was his first time in prison, and he was crowded into the cell alongside five veteran criminals who extorted money from him with persistent threats.

In the early days of his detention, security officers visited Mr. Maksataliev and showed him a list of other businessmen in the city. They asked whether he knew them.

Mr. Maksataliev said he had only learned the word Akramia recently, when interrogators showed him a religious book and asked whether he’d read it.

He wasn’t familiar with the book, he said. He’s never felt particularly fervent about his Muslim faith, skipping some of the required daily prayers. The trial was a farce, he said. The evidence consisted of denunciations from two witnesses: The first was a disgruntled worker he had fired, and the second was a local kook who accused everybody of belonging to a dangerous religious group — including the presiding judge.

“We had a business association, and we were growing stronger,” he said. “Maybe [Uzbek President Islam] Karimov was afraid that if the business groups grow stronger, we could unseat him.”

The insurgents weren’t religious fanatics, he said. He said they seemed like ordinary people driven to take up arms; most of their rhetoric was about the economy.

Mr. Maksataliev said he stayed at the government building because he hoped to explain the situation to President Karimov. But he felt a sense of foreboding. “I knew it would end badly.”

Also, check out these sites for more Uzbekistan coverage…