Landless rural farm workers in Brazil have been walking for a week from Goiania to the capital of Brazilia demanding increased funding for agrarian reform from President Luiz Inacio Lula da Silva. 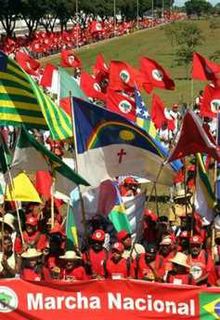 12,000 protesters gathered in the capital, Brazilia after a 105 mile protest walk.

The protesters planned on gathering in the capital today but violence broke out late this evening between the protesters and police.

Around 20 Brazilian police officers and 10 landless activists were injured on Tuesday when mounted police clashed with demonstrators advancing on Brazil’s Congress in a protest for land reform.

The clash occurred at the end of a day’s march when a group of dozens of police officers on foot became surrounded by hundreds of marchers, police said.

“They were isolated and at that point the mounted police entered,” said Maj. Nevitton Pereira.

Around 10 police on horseback moved into the crowd of marchers surrounding the officers. Demonstrators hit back by throwing stones and sticks at the police and the mounted officers charged into the crowd, striking protesters with their batons during the brief clash.

The violence capped a week-long march on Brazil’s capital by a group of more than 12,000 members of the Landless Workers Movement, known by the Portuguese acronym MST, who demanded that President Luiz Inacio Lula da Silva remain loyal to his campaign promises of land reform.