A Belarus official accused the US and the West of financing democracy protests in his country and declared that there would be “No Citrus Revolution” in Belarus:

Asked by newsmen Friday whether unsanctioned rallies in Moscow and Minsk were financed from the West, Vladimir Grigoriev, Belorussian ambassador in Moscow, answered in the affirmative. “This was a provocation to see government reaction. The reaction has proved to be what it should be.”

Vladimir Grigoriev promised no “citrus revolutions” in Belarus, saying there were no prerequisites for revolutionary events.

“We shall sound out the situation by ourselves. We know what to do,” he said.

Dealing with the unsanctioned rally in Minsk on April 26, Grigoriev drew attention to the fact that the 30 detained offenders were prevailingly foreigners: 14 Russian and 15 Ukrainian citizens.

“We did not violate law at the arrest-we were quite liberal with the participants in the unrest,” he said. 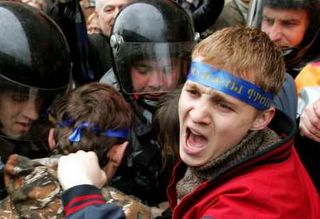 So, is this an example of “being quite liberal with participants”?

Fourteen Russian protesters were freed yesterday after being detained in Minsk, Belarus during a democracy protest and youth rally last week on the anniversary of the Chernobyl Nuclear Disaster.

Belarus officials are wanting to keep a close alliance with Russia as they believe this represents:

“This fact demonstrates Belarus’ readiness to strengthen the relations of alliance with Russia,” Spokesman for the Belarusian Foreign Ministry Ruslan Yesin told journalists on Saturday. 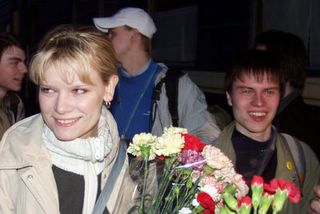 The rally last week in Minsk commemorating the anniversary of the Chernobyl nuclear incident landed 40 youth demonstrators from Belarus, Ukraine and Russia into jail. Almost all activists of Russian, Belarusian and Ukrainian youth organizations were sentenced to 10 or 15 days of arrest.

Five Ukrainians remain in prison as the Ukrainian authorities negotiate for their release:

Five Ukrainian citizens arrested for participation in the unsanctioned meeting on Saturday, April 30, remain in prison in Minsk, the press service of the Ukrainian FM informed the “proUA”. Today the consul and ambassador of Ukraine in Minsk are planning to hold another meeting with the detained citizens of Ukraine. “Foreign Ministry of Ukraine and Ukrainian Embassy in Belarus continue to with the aim to exert efforts for release of the Ukrainian citizens and their return home,” the report of the Foreign Ministry states.

About 40 demonstrators held a silent vigil outside of the detention center last night in support of those detained. This silent protest was not interrupted by the police:

In the evening on April 30 members of Belarusian youth oppositional organizations together with representatives of youth organizations from Russia and Ukraine held a protest in front of the special detention center in Akrestsyn street.

About 40 activists gathered by the entrance of the detention center. They represented different political associations: the youth movement “Zubr”, the “Young Front”, the Belarusian Popular Front, representatives of Russian oppositional parties “Marching Without Putin”, “Oborona”, the Union of Right Forces.

Policemen had not reacted to this protest in any way. People held candles and were standing silently. They showed solidarity with political prisoners who remain behind bars: with five members of the Ukrainian party “National Alliance” and 8 persons from the “Young Front” and the Party of Freedom, Radio Svaboda informs.

Meanwhile,… the Belarus Parliament passed a vote condemning foreign interference into to the nations politics.

This is in agreement with what Vladamir Putin said last week on his Middle East trip. Putin said that he was “not for exporting democracy” on his stop in Egypt.