SCENES OF MOVING THE DEAD IN ABIJAN HERE

“If the reports of more than 700 deaths since Friday hold true and if Uzbek forces were behind the killing – as most reports indicate – it would be some of the worst cases of bloodshed involving a government’s troops and civilian demonstrators since the massacre of protesters in China’s Tiananmen Square in 1989.” 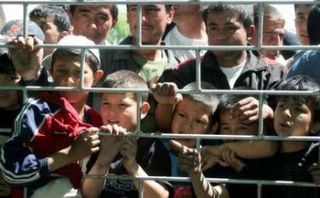 Refugees waiting to cross into Kyrgyzstan

Gruesome reports are coming out of Andijan as western media is slowly let back in to certain areas of the city of 300,000:

Uzbek soldiers reportedly fired into a crowd of thousands protesting over hardships in the former Soviet republic as police officers begged them not to shoot.

“They shot at us like rabbits,” one youth said. Troops later moved in among the bodies, finishing off some of the wounded with a single bullet, according to another witness. Panic broke out as security forces fired on the crowd from roof tops and pursued fleeing demonstrators down narrow alleyways.

“Those wounded who tried to get away were finished with single shots from a Kalashnikov rifle,” one man said. “Three or four soldiers were assigned to killing the wounded.”

“Soldiers from two armoured vehicles began shooting at the people several times and in a sweeping fashion,” one witness told French media.

Sporadic shooting continued Monday in an eastern Uzbek city where an uprising sparked a crackdown by security forces that left up to 500 people dead, and a human rights group reported that clashes in another town killed an additional 200.

The spreading unrest in a region bordering Kyrgyzstan – the worst since Uzbekistan gained independence from the Soviet Union in 1991 – also left 11 people dead in clashes Sunday in a third town and sparked a rampage by residents in a fourth town on Saturday, witnesses said. 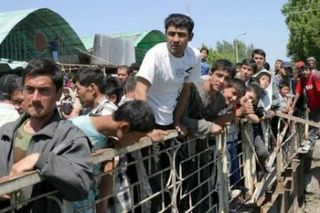 Fleeing the violence and brutality

Britain slammed the violence as “a clear abuse of human rights,” the strongest international rebuke of the clashes yet and London’s harshest criticism in years of Tashkent, a key ally in Washington’s war on terror.

“The situation is very serious, there has been a clear abuse of human rights, a lack of democracy and a lack of openness,” Foreign Secretary Jack Straw said.

Saidjahon Zaynabitdinov, head of the local Appeal human rights advocacy group, said Monday that government troops had killed about 200 demonstrators on Saturday in Pakhtabad, about 20 miles northeast of Andijan. There was no independent confirmation of his claim.

That violence would have come a day after some 500 people reportedly were killed in Andijan — Uzbekistan’s fourth-largest city — when government troops put down a prison uprising by alleged Islamic militants and citizens protesting dire economic conditions. 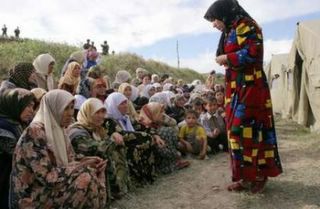 Lining up outside an encampment in Kyrgyzstan

Survivors are starting to talk about the bloodbath on Friday as the town slowly opens up to outsiders:

Rustam Iskhakov, a human rights worker in the town, confirmed to The Guardian that the number of dead was “preliminarily about 500”.

He said soldiers had walked calmly among unarmed civilians who had been wounded when they opened fire, and shot injured survivors in the forehead.

According to Iskhakov, the largest number of civilian casualties came after troops opened fire on civilians, including women and children, near a college next to the town’s centre. “They shot at us like rabbits,” a boy in his late teens told Reuters.

For more on Uzbekistan, see:

Update: (Monday AM) Bless Glenn Reynolds, at Instapundit for using that strong voice of his to share the story of this gruesome massacre from the weekend.

I was reminded as I drove to work this morning that there are others in a far away land finding their loved one dead at a school/morgue… and how the challenges I face today in this prosperous, free country were nothing at all, compared to the horror and tragedy of my brother in remote Uzbekistan.

Update 2: I received an email from Colin from “Hey Dude Whoa” blog who has a friend in the Peace Corps stationed in Uzbekistan. Colin sent me two posts he put up of emails his friend sent from Uzbekistan here and here.