While on a Five Day Middle East Visit 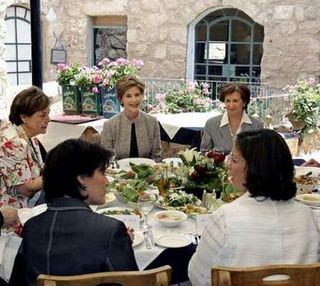 The First Lady springs a women’s rights speech on her Jordanian audience while on a five country Middle East tour:

US First Lady Laura Bush made an impassioned plea for the empowerment of women in the Middle East and Afghanistan, in a keynote address at a World Economic Forum meeting in Jordan.

“Now we are seeing a springtime of hope across the Middle East. Brave men and women are writing a new chapter in the story of self-government,” she said referring to recent polls in Afghanistan, Iraq and the Palestinian territories.

She also praised the men and women of Lebanon who “raised their voices … (and) called for an end to (Syrian) occupation and an opportunity to vote freely” in elections later this month.

The wife of US President George W. Bush likewise expressed her “delight” that the Kuwaiti parliament this week granted women the right to vote.

“Women who have not yet won these rights are watching,” she said at the meeting on the shores of the Dead Sea.

“A mother’s ability to read and write is especially important. Our mothers are our first teachers and children’s success is linked closely to theirs,” Laura Bush said.

“Education helps freedom thrive. Freedom, especially freedom for women, is more that the absence of oppression,” she said.

“And we must ensure that women acquire the political and economic access to become full participants in society,” she added.

The Literacy Rate for women in the Middle East is astonishingly low with less than half of adult women unable to read or write.