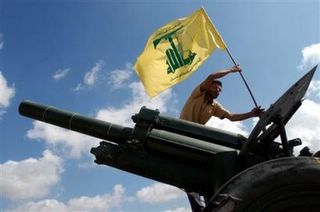 Iran helps raise the flag of Hizbullah* in Lebanon.

Iran’s Foreign Minister, Kamal Kharrazi, made a strong endorsement supporting of Hizbullah on his visit to Lebanon today:

Iran said on Thursday a U.N. resolution demanding that militias in Lebanon disarm does not apply to the Hizbollah guerrilla group it supports.

“What is here is a resistance linked to the Lebanese government and the Lebanese people and no government or people would cut off its own hand,” he told reporters on arrival at the airport, speaking through a translator.

Hizbollah, which is facing mounting international pressure to disarm, said on Wednesday it would fight anyone who tried to take away its weapons, which were only for use against Israel.

“We do not want to attack anyone and will not allow anyone to attack Lebanon but if anyone, anyone, thinks of disarming the resistance we will fight them like the martyrs of Kerbala,” said Hizbollah chief Sheikh Hassan Nasrallah, referring to a battle in Islamic history that is central to Shi’ites.

Iran, along with Syria, has long backed Hizbollah, whose guerrilla attacks were instrumental in prompting Israel to end its 22-year occupation of south Lebanon in May 2000.

Also, Thursday, Syria must be feeling the heat as it declared that it stopped 1,200 fighters from entering Iraq.