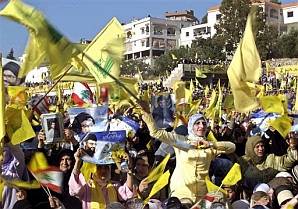 Hizbullah threatened Israel today at a rally admitting for the first time their ability to strike within its borders:

Hizbullah leader Sheikh Hassan Nasrallah threw down the gauntlet on Wednesday against the US and the UN over any attempts to disarm the extremist Iranian-backed Lebanese Shi’ite organization.

He also issued a direct warning to Israel that the organization has more than 12,000 rockets that were capable of reaching all of northern Israel.

It was the first time that the head of Hizbullah has stated categorically that it has the capability of striking Israel with a bombardment of rockets, many of which are believed to be long-range versions that could reach Haifa and its environs.

Nasrallah was in a fiery mood when he addressed tens of thousands of people at a rally to mark the fifth anniversary of the IDF’s withdrawal from south Lebanon.

Syria withdrew its military forces while apparently leaving a widespread network of intelligence and security apparatus in Lebanon in compliance with UN Security Council resolution 1559.

The same resolution calls for the disbandment of all militia organizations in Lebanon, but Hizbullah has become the only recognized militia in the country, on the pretext of being the Islamic Resistance.

Not only has it survived because of its claim that it is the sole defender of Lebanon and its people, Hizbullah has continued to receive supplies of weapons from its ideological mentor and financier, Iran, via another patron, Syria.