On June 4, 1989 Chinese Government Forces slaughtered from 400-800 official reports to 2,600 or more innocent democracy protesters in Tiananmen Square in China.

On May 13, 2005 Uzbekistan Government Forces massacred from 745 (169 government numbers) to more than 2,000 innocent men, women and children at a similar reform protest in Andijan.

Condoleezza Rice- “The issue is, it is a society that needs reform…”
Death Toll Climbs- Opposition Claims 745 Murdered. 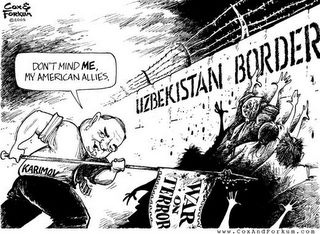 *Glenn Reynolds, the “Great One” and the Great Voice behind Instapundit, has started a “Buzz” here, here, and here, and that is just from Tuesday.

* Gifted and informed, Nathan Hamm from the Registan describes the situation in Uzbekistan at Open Democracy… This is a brilliant piece and Nathan details like no one- background material, the build up to the weekend massacre, and the Andijan massacre from eye witness reports.

* The Registan is thoroughly detailed and the most complete site for the latest word on the Andijan Massacre.

*Blogger Nomad shares news from contacts on the ground in Kyrgyzstan near the Uzbekistan border visiting and providing assistance to one of the refugee camps that the UN has set up for those fleeing the violence in Andijon.

* Robert Mayer at Publius Pundit notes the international eye that is focusing on Uzbekistan highlighted by the trip of British Secretary Straw to Washington. 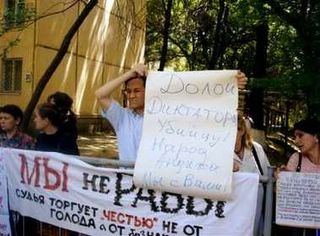 Uzbek peasant protesters outside the US Embassy in Tashkent. The protesters chose the US Embassy because they know they are less likely to be attacked there than in front of a government building. The sign reads ‘Down with the dictator, murderer! People of Andijan, we are with you’!

* IRIN News Service speaks to survivors with stories like this one…

“We heard on the radio and TV that President Karimov had come to Andijan and we gathered on the main square to tell him about all our problems but the president did not talk to us. We got bullets instead.”

* Protest in Washington DC on Wednesday at 12-1 PM at the Embassy of Uzbekistan.

Instead, the west must make crystal clear to the government in Tashkent that there are diplomatic consequences for a regime that massacres its civilians, while offering strong incentives for reform. This combination of criticism and engagement is the only way that the west can make a positive impact in Uzbekistan. There are no short cuts. 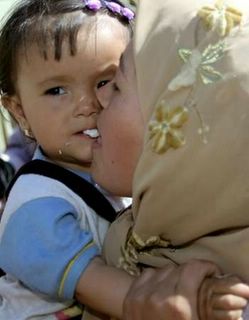 An Uzbekistan mother feeds her baby in a Kyrgyzstan refugee camp.

* Blogger Colin at Hey Dude Whoa continues to receive emails from his friend inside Uzbekistan.

Well, it’s official. The BBC web-browser in my local cafe has been blocked by a crude looking page that is supposed to look like the MSN homepage…

…The next hotspot looks like it will be Karasuv, which is a border town of Kyrgyzstan. The residents have already taken over the mayor’s office, the tax-collectors building and the local police office, which according to BBC radio, are the three most hated institutions of local government. I can wholeheartedly agree with them…

* In Korasuv an Islamic rebel leader spoke with the AP today:

The leader of a group of rebels claiming to control this Uzbek border town said Wednesday that he and his supporters intend to build an Islamic state and were ready to fight if government troops attempt to crush their revolt.

“We will be building an Islamic state here in accordance with the Quran,” Bakhtiyor Rakhimov told The Associated Press while leaning down from the back of a horse.

Tense but confident, the bearded 42-year-old farmer, wearing a traditional Uzbek embroidered black-and-white skull cup, snapped his fingers as he gave orders to an assistant. It was unclear how many people he commanded, but there was no sign of any Uzbek government officials in the town of about 20,000. 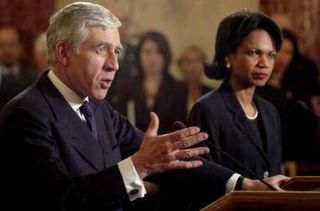 US Secretary of State Condoleezza Rice and British Foreign Secretary Jack Straw met Tuesday in Washington to urge the Uzbekistan Government to reform.

* AFP is reporting the new death total in Andijan:

Uzbekistan’s autocratic leader Islam Karimov faces increasing international pressure as the reported toll from a military crackdown in the eastern town of Andijan rose to 745.

* However, Uzbek Authorites put the number much lower yet a big jump from their original total of 10 and still an enormous number:

Uzbekistan’s top prosecutor said Tuesday that 169 people were killed in last we
ek’s violence in the eastern town of Andijan, a figure far lower than that compiled by opposition figures after violence that has threatened the stability of this former Soviet republic.

* Western officials arrive in Uzbekistan for a “government sponsored investigation”:

A group of 36 foreign diplomats from countries including the US, France and Russia have arrived in Andijan in an effort to get a first-hand look at the site of clashes between protesters and security forces last weekend, an Agence France-Presse reporter with the group said.

Despite conspiracy theories that one or all of them are behind the turmoil, George Bush, Vladimir Putin and Islam Karimov have all lost face since Friday’s protests, and should be praying that the storm dies down soon. Each leader, in his own way, is to blame for allowing public discontent and lawlessness in Uzbekistan to reach such a volatile level.

Update: (Wednesday AM) Instapundit is continuing to relay this tragic story as the numbers rise in Uzbekistan.