Ruth Matar is a founder and leader of “Women in Green” an organization in support of the Jewish settlers in Gaza and have found welcome support from many US Christian Churches.

HERE IS A CLIP OF RUTH MATAR ADDRESSING PROTESTERS EARLIER THIS YEAR IN CRAWFORD, TEXAS AND HER VIEWS ON THE FORMER SECRETARY OF STATE. 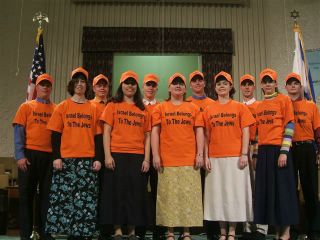 Up to 50,000 US Baptists(that number from the Israel National News video clip) are expected to travel to Gush Katif settlement in the Gaza Strip next week in support of the Israeli settlers who are scheduled to leave the compound by summer’s end.

The expusion of the settlers from Gush Katif is not popular in Israel. From the “Women in Green” website:

According to a poll in this Friday’s Maariv now only 54% of the Israeli public (including Israeli Arabs) favors disengagement, down from 65%. Our protests must continue and increase. The more we keep the security forces busy, the less they can get organized and ready for Deportation) day.

The “Women in Green” have drawn out their battle plans to stop the expulsion of Jewish settlers of Gush Katif:

As we have said before, five elements will, please G-d, thwart Sharon’s plan:

1) The steadfastness of the Gush Katif and Shomron residents in their unwillingness to leave on their own free will for compensation.

2) The thousands of people who will come and live in Gush Katif and the Shomron and thus will double and triple its population.

3) Hopefully hundreds of thousands of protesters who will, with non-violent civil disobedience, shut down the entire country the day Sharon will try to close down Gush Katif.

4) The tens of thousands of soldiers who will save the IDF’s honor by refusing to give a hand to the crime of the uprooting and will prefer to go to jail then obeying the illegal and immoral order of the deportation.

5) The thousands of protesters who will proudly fill the jails.

“Women in Green” are calling upon all to take part in the different activities and protests in support of Israel settlers at Gush Katif.