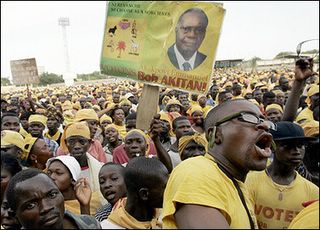 A United Opposition Rally on Friday in Lome

If I were telling the news…

If I were a news man this is what I would say. I would say to keep your eyes on Togo. I would tell you that there is a small country on the West African coast that is having a difficult time. I would tell you about how the dictator of 38 years died in February and his son was then put into office. But, after international outrage, the country decided to follow the constitution and hold a presidential election.