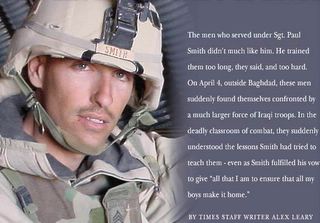 Sgt. Paul Smith was honored today in a White House Ceremony. Paul Smith’s son David was presented with the Medal of Honor, awarded his father, Sgt. 1st Class Paul Smith, posthumously Monday during ceremonies at the White House. Joining David on stage are his step-sister Jessica and his mother, Birgit Smith. Secretary of Defense, Don Rumsfeld; Secretary Jim Nicholson, of the Department of Veterans Affairs; Senator Carl Levin, Senator Bill Nelson, Senator Mel Martinez, Senator Johnny Isakson and Congressman Ike Skelton were present at the ceremony. Sgt. Smith is only the third American to be awarded with the Medal of Honor since the Vietnam War.

The Medal of Honor is the highest award for bravery a President can bestow. It is given for gallantry above and beyond the call of duty in the face of enemy attack. Since World War II, more than half of those have been awarded this medal gave their lives in the action that earned it. Sergeant Paul Smith belongs to this select group. -George W. Bush 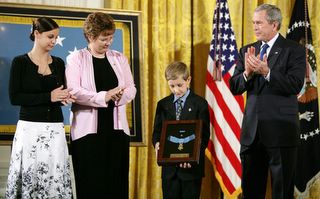