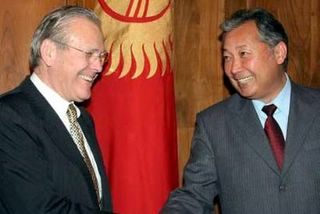 Defense Secretary Donald Rumsfeld made a stop in Kyrgyzstan today, the latest country to see regime change and democratic reform by a popular uprising:

Rumsfeld’s plane landed at a U.S. airbase in the country from where the secretary will go to the Kyrgyz capital of Bishkek. This is the first visit of a top U.S. official to Kyrgyzstan after the change of regime at the end of March.

In recent days, Rumsfeld has paid visits to Azerbaijan, Iraq, Afghanistan and Pakistan.

Kyrgyz officials assured Rumsfeld of their support for the War on Terror:

Leaders of Kyrgyzstan’s interim government assured Defense Secretary Donald H. Rumsfeld on Thursday that political upheaval in this former Soviet republic would not jeopardize American use of an air base for supporting the war in Afghanistan.

Ousted President Akayev’s daughter, Bermet, also made a surprise visit to parliament herself today. Bermet said that she was not afraid even though parliament had stripped her family from immunity of prosecution.