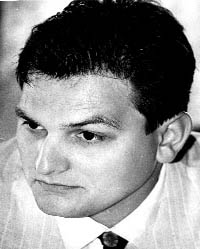 Klimov On Trial for Insulting Remarks

Interfax is reporting that the prominent Opposition Leader in Belarus, Andrei Klimov, who is believed to be behind the March 25th protest in Minsk, was put on trial today:

Prominent Belarussian opposition member Andrei Klimov has been put on trial for insulting the country’s president.

The trial is taking place in Minsk’s Pervomaisky district court behind closed doors, an Interfax correspondent reported. Journalists have been barred from attending the court session.

The case “was opened based on remarks in Klimov’s ‘Obvious Truths’ and ‘I Have Made My Choice’ books,” sources in the prosecutor’s office told Interfax.

An expert examination concluded that the remarks “are indecent and insult the [Belarussian] president,” the sources said.

About the closed hearing, Klimov said this:

“The fact that the hearing is closed to the public speaks of the kind of our judicial system. But they won’t imprison me in any case,” a calm Klimov said in an interview with BelaPAN moments before the hearing began.

The 39-year-old Klimov has waived his right to legal counsel in the case.

Klimov had these brave words to say to reporters before his trial today:

“I have deliberately rejected the help of attorneys,” he said in an interview with BelaPAN. “I know whom I’m up against, [I know] that I’m a state criminal for the Belarusian court and I have no illusions about the trial. That’s why I’m ready to talk to these people from any viewpoint, but not from the point of view of the Belarusian laws because it is useless.”

“On the other hand, I’m well aware that these people also know whom they’re up against. The process of the Belarusian revolution that started on March 25 will be my best lawyer,” Mr. Klimov went on to say.

The 39-year-old Klimov was arrested in February 1998 and sentenced to six years in prison two years later for alleged large-scale embezzlement and forgery. Domestic and international human rights groups viewed the sentence as politically motivated, linking it to Mr. Klimov`s active role in the Supreme Soviet`s impeachment motion against the incumbent president in 1996. Amnesty International declared him a prisoner of conscience.

Mr. Klimov was released from a Minsk prison on March 25, 2002 following a district court ruling commuting his prison sentence to “corrective labor.”

The politician has announced his intention to run in Belarus` 2006 presidential election.

Here is part of a letter he wrote while he was in prison after an arrest in 1998:

I am 34. I think that I did not live my life in vain. Not a single voter in my constituency, even he who did not vote for me, cannot say that he is not proud to have such a deputy, who regardless of his personal interests and interests of his family, sacrificed the most precious thing – his freedom. I have done it for one thing – to keep my word: to be a honest person of integrity.

He spent 4 years in prison for this earlier offense.

It is believed that Klimov is behind the protests on March 25th in the capital of Minsk:

Andrei Klimov, an opposition leader who organized the protests, said his goal was to help spark a revolution similar to those that have swept the ex-Soviet republics of Georgia, Ukraine and, most recently, Kyrgyzstan, ousting unpopular leaders.

“Today’s gathering must send a signal to the West, Russia and our own bureaucrats that Belarus is ready for a serious change,” Klimov said. “Our aim is to start the Belarusian revolution and force the resignation of Lukashenko, the last dictator of Europe.”